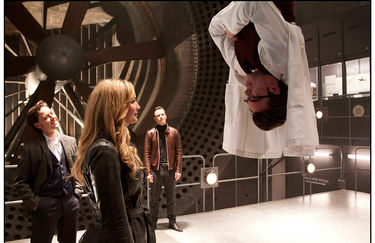 
This reboot of a sagging action-adventure franchise may be a bit episodic and uneven, but it often fills out the origin of its Marvel (comic-book) mythology with heady excitement.

X-Men: First Class uses the backdrop of the Cold War - specifically the events depicted in Thirteen Days (a historic Cuban Missile Crisis) to its advantage and the much potential for wide global reception.

Helmer and co-scribe Matthew Vaughn (Kick-Ass) situates events that capture the mood of early 007 (see Dr. No and Goldfinger) as characters are nicely integrated into something perhaps nostalgic, but also slick.

In 1962 Charles Xavier (James McAvoy of The Conspirator), before he was Professor X, is retained by the CIA's Dr. Moira MacTaggart (Rose Byrne, good in Bridesmaids) for getting the most out of extraordinary human outsiders, or "mutants."

A kinesthetic-capable Charles shared his childhood with a shapeshifter in Raven (Jennifer Lawrence of The Beaver, but see Winter's Bone). They begin to put together a special group who includes metals-savvy Erik Lehnsherr (Michael Fassbender), before he was Magneto.

Erik has strong feelings against energy-filled, gifted Sebastian Shaw (Kevin Bacon) from what happened to his mother in a Nazi war camp. Of course, the slippery Shaw has his own squad of mutants like Emma Frost (January Jones of Unknown) and others as played by Alex Gonzalez and Jason Flemyng. He's on the verge of triggering something calamitous between the United States and the Soviet Union.

It's interesting to note that Vaughn's devotion to the originality of the antecedent and the subtext within it makes for a universe easily identifiable through its characters, a sense of humor and the simmering emotions. So, there is a diversity to the actors' range - some fun is provided by Caleb Landry Jones and Lucas Till as Xavier aides Banshee and Havok, respectively. If the mutants are sometimes short-shifted, Lawrence shapes out the more multifaceted of them as some unforeseen cameos pop up.

Something absorbing and vivid overwhelms a wavering to exact the genius into the conflict of mankind and evolution in what may be politically charged for some during a time when Civil Rights began knocking on the door and provoking much change.

A polished production crew underneath the deft interpretation of a premise have what it takes not to let the state-of-the-art visuals push the story and characters to the background (perhaps what might have been the case in the first X-Men). The interplay of allies and foes is cogent and palpable enough as the final, climactic reel should keep many on the edge of their seats.

It turns out that Vaughn is a formidable fore-bearer of a franchise with new possibility not grown accustomed to giving in to Hollywood's temptations. Having the personalities of Charles and Erik there to organically grow as the tension builds shows how performers like a calm, cerebral McAvoy and a cold-blooded, charismatic Fassbender (see the recent Jane Eyre and Inglourious Basterds) are the inspiration to elevate the standards of what often passes as a blockbuster these days. If the storyline churns a little more than stirs up an often awesome X-factor, an involving take on mutants and civilization has more than enough of a thrilling mystique that keeps Marvel-based movies first-class this summer so far.