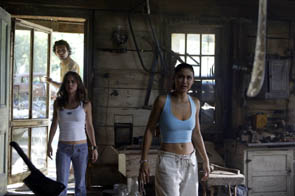 Rob Schmidt's Wrong Turn easily rates as one lost, frenetic horror picture.  And it definitely won't play long in West Virginia if local theater owners have any say.  It's clear in a matter of a few minutes that Stan Winston's production company (one of many producers) is barking up the wrong tree, or forest for that matter.

On the way to Raleigh, NC for a job interview, Desmond Harrington's Chris Flynn gets caught up in traffic behind a chemical spill.  He backtracks through the West Virginia highway to a short cut.

Chris' light blue refurbished classic Mustang is totaled and the dazed man who appears to be planning a medical career will have a major detour.  Alan B. McElroy's screenplay attempts to fashion a "monster" movie in a way that pays tribute to cult classics from the likes of Toby Hooper and Wes Craven.  But, from the opening vertiginous sequence involving two rock climbers this outdoor slasher opus has a barbed-wire mentality.

Harrington was recently in the failed Ghost Ship which showed more signs of foreboding than here.  Chris is paired up with Jessie, gamely endowed with some sensibility by Elisha Dushku of Bring It On.  These two, along with Scott (Jeremy Sisto from Angel Eyes) who wants to marry girlfriend Carly (Emmanuelle Chriqui of On the Line).  Carly thinks he's rushing their precious relationship.

Unfortunate horror buffs will try to find something worthwhile in this rocky carnage partially set on forest treetops; tension is grounded in potent sound effects, not reality.  The visceral effect of some of the arrow thrusts and axe-wielding is short-lived as Schmidt finally puts a blast into a torturous climax back at the cabin.

The choppy nature of the tale seems out of sync with a production that seems too lush for what is truly a wrong turn for all involved.