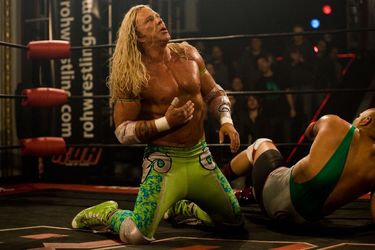 
The Wrestler is one of the rare occasions where lead actor and director are aligned just right in utilizing their talents to a high level.

Mickey Rourke nailed the role of the unstoppable Marv in Sin City and here as Randy "The Ram" Robinson it's quite the comeback under the sharp direction of Darren Aronofsky, who, himself rebounds after The Fountain.

"The Ram" was once a big wrestling star in the 80's and still has much leverage when it comes to the younger, rising athletes. Yet, the ring is more brutal than in his glory days, and his heart is in decline.

The sensible, focused scripting by Robert D. Siegel has Randy spending more time on his grocery store day job as he begins a more serious relationship with his leading lap dancer, nicely etched by Marisa Tomei (Before The Devil Knows You're Dead). His new lease on life after all of the injuries and drug dependence includes trying to reconnect with his daughter (Evan Rachel Wood of Thirteen, Running With Scissors).

The approach of the helmer to make a wrestler's life casual, yet candid resonates with documentary-like realism. Aronofsky is intent to infuse much grit into a tale where priorities have abated one's self-worth as many scenes are extended to make it clear how emotionally and physically jaded Randy has become. Trying to appease a daughter, unhappy customers, or supporters hoping for another "Ram Jam" is something that Rourke and the filmmakers lace with raw, truthful precision.

As "The Ram" describes how he feels like a car, but as a "piece of meat", Rourke realizes the character's passions, even as he is hampered throughout, most notably in his gait. His visage says so much for a man beaten down in life, but still has his own "eye of the tiger".

The actor's acclimation to the role is such that he knows what hand he's been dealt and is ready for what life has to offer. Consequently, the rapport with Wood and Tomei, besides some actual wrestlers, demonstrates the level to which one can deal with personal demons.

Aronofsky and Rourke work with their cast and crew members to make this portrait so natural and understanding to a lifestyle that veers from the raucous to the tender. In its unique way, The Wrestler can be affecting, quite funny, and pensive, as the lensing brings much definition to what Randy has to embrace. With his face being quite an indicator on and off the screen, Rourke takes a personal harrowing decay to heart with surprising humanity.