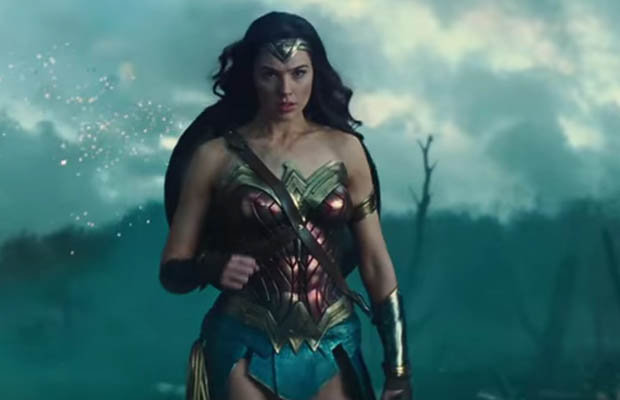 
Seeing her first snowfall Wonder Woman says "wonderful," and that is an exact description of her film, it is by far the best interpretation of a DC super hero film to date.

Some have said what took so long to create a film with the lead super hero who is a woman. Could it be they were Waiting for Godot? Ok that may appear lame, but Gal Gadot an Israeli actress is flawless as the leading character and with Chris Pine (Star Trek) as her side kick (he doesn't quite accept that) how could it not miss with Wonder Woman and Captain Kirk working together against alien evil.

Wonder Woman appeared in Batman vs Superman: Dawn of Justice but this is her first film and if sequels are near the quality and intelligence of this one there will be a series of WW films on the screen.

In the opening scenes Diana (Gal Gadot) appears to be working in an office in present time, she opens a case and takes out an old black and white picture in which she and Steve (Chris Pine) are shown in the early part of the 20th century. Director Patty Jenkins quickly moves in on the picture and directly to the Amazon's secret private island where Diana is the only child. The more she is protected the more her curiosity about the battling well trained adult women becomes paramount in her life. She becomes a sound warrior and we know by instinct that she has a special genetic make up that makes her even more powerful than the other woman on the island.

Her island is hidden in a fog bank, sounds like King Kong but Steve (Pine) crashes through the fog and a protective barrier into the shallows off the island. Diana using more capability than she has displayed before, rescues him from the crushed plane. That leads to an invasion by German military who were following Steve. The powerful woman fight off the invaders using spears and arrows, but the guns on the other side prove to be a problem. Diana's special powers begin to show as the World War I soldiers are defeated.

Agreeing to head off her protected island to the outside world Diana and Steve enter the world of war which is on going in Europe. It is her understanding that the defeated god Ares is the cause of all evil in the World and she is determined to destroy him to stop all wars and violence.

Her initial battles with General Ludendorff (Danny Huston) who she believes to be Aries are not the climatic battle we expect. The final giant battle takes place late in the film and it is just long enough. Far too often the battles between super heroes and the enemies stretch our endurance. This one is just right.

Diana learns that more than one evil person exists and she discovers that love is the only force that can defeat the bad guys.

Filled with interesting and at times comical characters. The film is well written by Allan Heinberg and Zack Snyder it shows Diana slowly learning how to control her power and how to fit into the existing European society.

But mostly Wonder Woman is a beautifully made hero film. Gadot is perfect, she is stunning to look at, but her expressions display her emotions and determination as an innocent who cannot accept violence if she can stop it. The sets and special effects Backgrounds give the feeling of the isolated island and the early 1920s Europe.

This is the best there is when it comes to super Heroes, expect strong audience with favorable interaction as WW makes her mark on society.