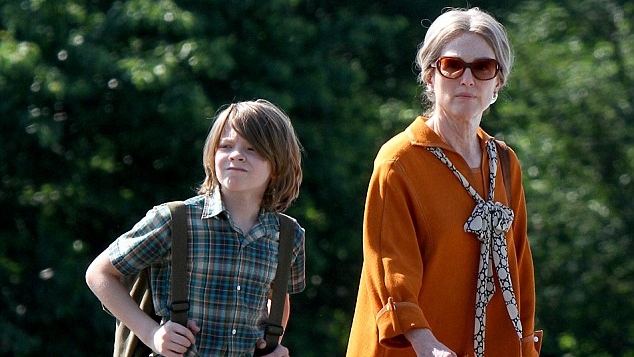 
Todd Haynes latest offering has unconventional storytelling begotten from an illustrated children's novel from Brian Selznick (Hugo) and quite a visual presentation that builds off of sentiment and contrivance. His aim to perhaps accomplish what Martin Scorsese did with the aforementioned film yields something less persuasive, more fabricated which ultimately may have more appeal to kids than their older counterparts. Though, at times, film buffs will be ingratiated in spite of how trying the overall experience can be.

Wonderstruck may not leave quite the emotional afterglow, but it has moments of imagination which truly captivate in a plot bifurcation. In 1927 young Rose is a deaf girl who departs Hoboken, N.J. for New York City. There's a famous actress important to her whom she's just seen on screen. In one of the final silent features before theaters begin to transition to sound (talkies).

Simultaneously, during the disco era - 1977 - orphan boy Ben becomes deaf in a freak act of nature. He's also off to the Big Apple (though from Minnesota) to make sense of a mystifying past. The changing of timelines is done with noticeable dexterity while one should not expect much of a pace.

Monochromatic hues dominate Rose's strand which unwinds like a silent film as writing is prevalent when lips aren't read. A vibrant groovy look covers Ben's time as the mystery will involve their connection. What they share is what has been inaccessible to them. For Rose it's a screen actress whose existence is chronicled in an album while in Ben's case it's a father virtually unknown to him.

The young actors in Millicent Simmonds (Rose) who's really 14 (and deaf, too) and Oakes Fegley of Pete's Dragon as Ben who's really 12 do quite well opposite established actresses like Michelle Williams (in a smaller role) and a preferred one of Haynes, Julianne Moore (Far From Heaven and in another dual role like the concurrent Suburbicon with Matt Damon).

Being struck with wonder is easy given the immaculate period feeling of Haynes's technical contributors like composer Carter Burwell and cinematographer Edward Lachman that will be more than bountiful for some onlookers. Just how the two milieus filled with angst and hankering unite is more brooding and ponderous than poignant and affecting as usually is the case with such a distinctive, venturesome auteur.