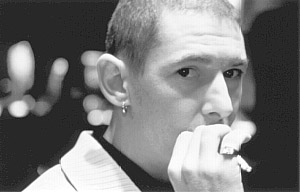 A sense of yearning to reach out underlines the human condition in the wistfully stranded Wonderland.  A gritty, realistic slice of London life over the course of a weekend makes good use of its Dogma 95 approach with natural lighting and hand held cameras.

Director Michael Winterbottom has been able to get meaningful performances from his characters in films like Jude with Kate Winslet and Welcome To Sarajevo from its British journalist's turmoil rescuing a child from the savagery of Bosnia.  Here, he works from the dysfunctional milieu of three British/Chekovian sisters, the main one being Nadia (Gina McKee) who at the beginning is seen in a close up while she is attempting to meet a blind date at a busy Soho pub, with the soundtrack of a personal ad played on voice mail echoing a message of friendship and possible romance.

Besides the love angst of Nadia, there's an expecting mother, Molly (Canadian actress Molly Parker), married to John Simm's Eddie, and a partying hairstylist in Debbie (Shirley Henderson - Topsy Turvy), raising a son (Peter Marfleet) without aid from feckless ex-hubby done by Ian Hart in a way that allows his cad some latitude and attractive qualities.

Mum and Dad (Kika Markham and Jack Shepherd) preside over the brood and their static marriage corresponds with the damp dreary November climate and the lugubrious messed up nature of the family.

Everyday life is presented in a genuine manner as the harsh realities of Nadia, Molly, and Debbie are penetrated with editing techniques in fast and slow motion that accentuate Winterbottom's offbeat, but affecting approach on life and love.

Things resonate with a poisoning of a persistent barking dog, bickering neighbors, and a runaway isolated child, as a mother delivers a new born.  Nadia's quest for Mr. Right has its flakiness from a photographer, but McKee knows how to make you care for her in an understated, physically appreciative role.

The way Wonderland communicates through Winterbottom's direction isn't very cohesive, and its lessons aren't always enveloping.  But it has a sense of its time, and it moves from a grim feeling to an uplifting, conclusion that makes this fairy tale title, a looking glass of depressed Brits, a dark, but funny experience that is always humanistically alive.