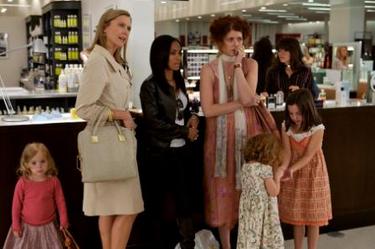 
Diane English's remake of New York ladies and the men they divorce may have strong appeal to fans of the recent Sex and the City big screen foray. It almost seems like its sister though diluted for a wider female audience. Yet, The Women (originally from a Clare Boothe Luce 1937 play) is hardly as snappy and sharp as the 1939 George Cukor original starring Norma Shearer and Joan Crawford.

Starring Meg Ryan, Annette Bening, Eva Mendes, Debra Messing, and Jada Pinkett Smith, the result, in spite of the impressive partially aforementioned list, just doesn't have the zest of something, in recent years, like The First Wives Club. It's more bargain-basement, along the lines of this year's forgettable Mad Money or Ryan's Hanging Up.

English, part of the creative team of "Murphy Brown", has considerably softened the edge of the antecedent, essentially what Michael Patrick King did to City making it seem more old-fashioned than what was clearly intended. As in her earlier success with Candice Bergen (also in Sex and here as Messing's mother), it feels tempered more to the small screen especially in the blase production work. The chattiness of this gaggle underlines this notion as the cast is often dragged down by the direction, even more so than the undistinguished script.

Ryan fills the role of Mary Haines, whose Wall Street banker spouse is in an affair with very comely cosmetics saleslady Crystal (played by Mendes in a part that seems miscast). When she issues a decree of divorce, a lather occurs among her friendly coterie, including chic fashion magazine editor Sylvia (Bening), actress Alex (Pinkett Smith) and housewife Edie (Messing, who doesn't have much to do).

The revamping of the episodes allows for more sympathetic characters, and ultimate it plays out with more success and saccharine concerning most involved, whether personal or professional, albeit a little payback. Even Bergen's cynical mother of the hurt Mary comes around for support as Bening's Sylvia is just too literal and too soft given her early peppery demeanor.

Perhaps coming off better is Bette Midler's high-strung talent agent cameo, though not as good as a housekeeper, amusingly done by Cloris Leachman (Spanglish), unafraid to show her age. Ryan and Bening fail to deliver interesting characterizations in a world with instant messaging, and it doesn't help that it's hard to believe that Mary's philandering beloved would be with someone like Crystal. And as others drawn into Mary's orbit, Carrie Fisher isn't that tart as an influential Vogue columnist nor Debi Mazar as a manicurist.

The Women has the perfunctory allure of the likes of Crystal to entertain a portion of its target audience with an insistent soundtrack trying to enliven things. But, it's more risible than riveting with a broad interpretation hardly reminiscient to Cukor's shrewish charmer with the only member of the opposite sex finally on view being an infant.