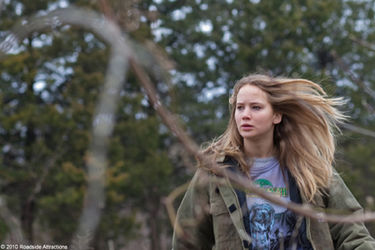 
This unhurried rustic noir adapted from a Daniel Woodrell novel is consistently riveting, hardly prodding or contrived. It has the kind of qualities that the makers of the original, acclaimed TV series "Breaking Bad" would embrace.

A deft, stark naturalism pervades Winter's Bone which stars Jennifer Lawrence, Valerie Richards, and John Hawkes (Identity). This low-budgeter has deservedly reaped some film festival awards and is sure to cop more praise.

When her dad (a drug-maker) hops bail, 17-year-old Ree Dolly (Lawrence) is in for some tough sledding; she wants to leave town, but the bondsman (Tate Taylor) is about to snare her family's property. Necessity demands being responsible for an almost catatonic mom (Richards) and younger brother (Isaiah Stone) and sister (Ashlee Thompson).

With her dad's disappearance connected to customs, a tenacious Ree is on a mission to locate him, inviting trouble in the process. Faithful to its antecedent, director Debra Granik (Down to the Bone) handles the narrative by herself and Anne Rosellini adroitly enough to make one feel the uncertainty and apprehension of Ree.

It's clear that Granik and Rosellini did their homework when it comes to the Ozarks mores within this type of close-knit enclave ("it takes a village"). The director works with her production crew, especially in design and lensing, to enable subtle power instilled through the mostly simmering characters.

Still, an anxiety and soulfulness really bristles through Lawrence in a truly breakout performance, loyal to the detail of what entails old-society tenets. Through Ree, one is pulled further into a thorny quagmire (including a beating), hardly presented in a cliched manner. Her indomitable intrepidness is easily palpable, as she can be desperate and tough. The casting of untrained local thespians adds to the authenticity, but it's hard not to overlook the strong support of a veteran like Hawkes as Ree's unctuous Uncle "Teardrop".

Winter's Bone seems like a sensitively drawn eavesdropping into a new kind of perception of poverty which gravitates with a quiet poignancy. If some feel that it is an endurance test of sorts, it is certainly well-earned and taken, as Granik and Lawrence make this high-minded feminine-empowered fare.