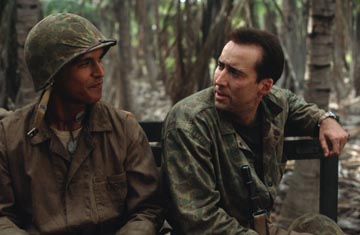 A few war pictures have come from Hollywood over the last few months and Windtalkers was held back the longest out of respect for audiences affected by September 11th.  John Woo's latest opus set in WWII is his most violent, but perhaps his most involving as he lightens up on the artsy film making in his past.

Here, Woo reunites with Cage in ways that find humanity from the torturous elements of war.  The part of U.S. Marine Sergeant Joe Enders is one that Cage makes his most memorable in a while, perhaps since winning his Oscar in Leaving Las Vegas.  He's paired in Windtalkers with Adam Beach's Ben Yahzee, the title comes from the role Yahzee plays with his native Navajo language vital for transmissions not being intercepted by the Japanese.

Before Enders and Yahzee met, communications for the U.S. fleet have been crippled and the Marine is suffering from the effects of a brutal ground attack that left him the lone survivor.  Enders has a noticeable scar from an explosion in that battle.

As the story begins to focus on the Battle of Saipan, windtalkers become Enders' main focus.  It presents a double edge sword with Enders required to protect the code talker but more importantly the code.  The other pair of characters are Christian Slater's "Ox" Anderson who is the guard for Yahzee's partner, Charlie Whitehorse, acted credibly by Roger Willie in his film debut.

The haunting, dehumanizing images of war don't make for friendly fighters at the start as Enders treats the meditative, idealistic Yahzee rather coldly.  They act as the scouts for a lager Marine battalion with Whitehorse deciphering the coordinates relayed by Yahzee in the code which directs troops to Japanese artillery stations.

A classic combat tale from writers John Rice and Joe Batteer is handled by Woo for much thematic and visceral effect.  It becomes clear that these code talkers aren't nearly treated like the rest of the Marines, at least for much of Windtalkers which benefits deeply from Jeffrey Kimball's large-scale cinematography.

A horrifying intimacy pervades Windtalkers with verdant sights and scary, intense pyrotechnics as Cage and Beach (Smoke Signals) make the relationship plausible, utilizing each other's qualities as they experience the war in different, horrific ways.

There are those who might see Woo is somewhat preoccupied with reflection in the heat of battle, but there is much resonance from an uncompromising, unrelenting Windtalkers, which does not hold many startling plot turns but is determined not to lose sight of brotherhood and patriotism in paying respect in a way to The Sands of Iwo Jima.