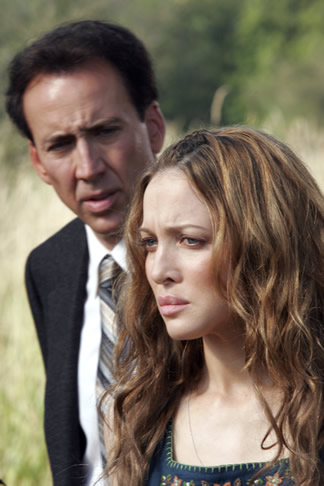 
It's always a bad sign when we laugh out loud during a film that's supposed to be deadly serious. But, that is exactly what happened while watching Nicolas Cage's new horror drama.

He plays California motorcycle cop Edward Malus, who's on leave from the job after witnessing a terrible accident. While at home recuperating from flashbacks of the traffic accident, he receives a letter from Willow, Kate Beaham, an old girlfriend.

She begs him to come to a small private island off the shores of Washington state to look for her missing young daughter. He sneeks on the island with the help of a pilot delivering supplies and receives a warning that the inhabitants don't like intruders.

The place is populated by men who don't talk and are live mostly for slave labor. The women run things with an iron fist. They dress like pioneers, call each other "Sister so and so" and make bee honey as their main source of sustenance. It's a scene almost out of the Old West.

When Edward finally meets up with Willow, she acts like she's been drugged. She doesn't answer a direct question and gives Edward no help in attempting to find her daughter. But, does Edward shake her and demand to know more about her daughter and this strange place they live in? No! What he does do however, is make sure that he always has his suit jacket and tie on. No matter what situation he finds himslef, whether its running into a stream, or trudging up a mountainous hill, or diving into an underground water hole, one thing we can count on is that Edward will be wearing his coat and tie. Except of course, when he's wearing a bear costume that he's stolen from a woman he just decked. I kid you not.

This ludicrous film is a remake of a 1973 British horror movie of the same name. Director Neil LaBute should have left it on the shelf as even the considerable acting talent of Nicolas Cage can't save it.