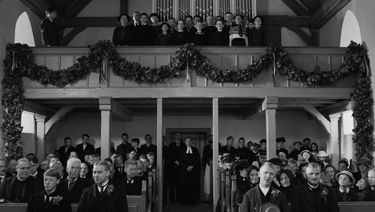 
This difficult, yet detailed drama has a hallucinatory timelessness to it with much sweep even though it's relatively a small-scaled endeavor.

The White Ribbon (in German, Italian, Polish and Latin with English subtitles) comes from the unconventional Michael Haneke (Funny Games, Cache) and stars Christian Friedel. The provocative filmmaker again has what is takes to unsettle and mesmerize a discerning audience.

Here, Friedel is young schoolteacher Lehrer who provides the voice-over for the proceedings as an old man (Ernst Jacobi) in a bucolic German hamlet before World War I (The Great War).

Lehrer believes that a series of accidents could have been the result of at least one of those in his tutelage. A little withdrawn and spooky to say the least.

A doctor (Rainer Bock) is hurt by a trip wire, and during the course of about a week unexpected deaths, disapperances, torture, and vandalism plague the community. It just happens that Lehrer is trying to impress a young nanny (Leonie Benesch), but is finding it hard to warm up to her family.

As grim and measured as it appears and unfolds, Haneke strikingly dextrous helming with especially fine work with his lenser Christian Berger brings a monochromatic pristineness to what is ambitious into an austere hierarchy.

Burghart Klaussner is the unyielding pastor who ties the titular object to his oldest children (Maria-Victoria Dragus and Leonard Proxauf) as a reminder of purity. The chief motif has to do with transgressions passed down to the next generation and its riveting nature comes from its relevance, notably in the abuse of power on political and social levels.

"It takes a village" really has much significance in this year's Palm D'Or winner at the Cannes Film Festival of where personal entropy can lead to and an underlying wantonness of those who wouldn't be considered duplicitous at all.

The White Ribbon is icy, methodical and disturbing when it needs to be as it laces tragedy throughout, even in its lighter moments. Haneke again lets the onlooker bear much weight as a peaceful Puritan-like existence is disrupted, especially when a youngster listens about death from a nanny. This haunting, very evocative stream-of-consciousness cinema may have too much of a melancholic mood but can be more than an awakening to the rise of fascism.