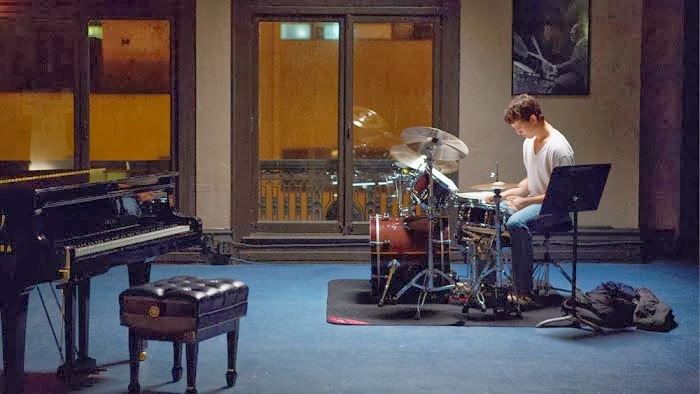 
This passionate, rousing tale of a very no-nonsense, irascible teacher and (one of his students) aspiring tyro Buddy Rich class drummer (a profession disrespected more often than not) may be prickly for some like the former character played by J. K. Simmons (recently in Labor Day, earlier Up In The Air and Juno and almost certain of an Oscar nod probably in the supporting category).

Whiplash stars Miles Teller (The Spectacular Now, Divergent) and a pretty strapping Simmons in more of a supporting role but part of the central, riveting duet that has a venerable vivacity in reaching rarefied air musicality that would inspire Rich or Charlie Parker.

Some may liken this to a sports movie or a hard-edged version of The Karate Kid set around a lauded Manhattan music school but could be like the locker room.

Writer/director Damien Chazelle expands upon a recent short film (also with Simmons) an appealing fierceness and physicality that the talented Teller as Andrew Neyman embraces to manifest the multi-faceted nature of committing to this rather punishing art form. Terrence Fletcher is the tough-love drill-instructor type (think of movies like An Officer and a Gentleman or Full Metal Jacket) to make the newbie buckle under his tough, tempestuous tutelage that may draw scorn and contempt (though not for the politically incorrect). Will Fletcher's unusually bigoted effrontery elevate what looks to be a natural aptitude into brilliance?

This kind of disparaging is not seen in winsome tales that also prove oddly exhilarating and energetic like The School of Rock as Fletcher comes across like a Bobby Knight type when hurling chairs. But, in this depiction where blood, sweat, and some tears are shed the tension with the autocratic Whiplash(taken from Hank Levy jazz standard) is always interpretative and interesting in this credibly, convincing clash of wills.

Chazelle enhances a singular vision where it would seem Simmons has the pre-eminent role and his hard-boiled tenacity seems to bring out the best, sometimes solemn, sometimes explosive, in Teller. On the fringes of a formidable challenge is Paul Reiser as Andrew's benevolent dad and Melissa Benoist as his romantic interest (with doe-like blue eyes, at least for a while) that perhaps are too awkwardly integrated into the narrative. But, that's just a minor defect in what more than ample acumen arises during the stressed-out sessions to bring body and soul to the amazing milieu of a determined, dedicated acolyte.