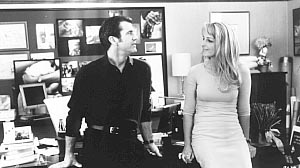 He plays advertising agent Nick Marshall.  A divorced father of a fifteen year old girl, who has spent most of his life avoiding responsibility and commitment.  A real chauvinist, he's the type of guy who calls women "babe" and slaps his cleaning lady's behind.

Nick expects a promotion from his boss (Alan Alda) but, Darby (Helen Hunt) is hired away from a competitor and given the job.

As part of an assignment to make his department more attuned to selling women's products, Nick tries pantyhose, nail polish and leg waxing, in a amusing visual.  But, while using a new hair preparation, he gets an electric shock while falling into the bathtub holding a live hair dryer.

When Nick wakes the next morning, he can hear women's private thoughts.  He discovers that most of his female co-workers really don't like him, and more important, he can use his new talent to steal Darby's ideas for a new advertising campaign and present them as his own before she can articulate them.

The first half of the film, before Nick uses his "gift" (with the help of his analyst, played effectively by Bette Midler), is unfocused and crowded with a sexual encounter with a coffee shop waitress played by Marisa Tomei and an intervention with a suicidal file clerk, neither of which advances or adds to the story line.

The chemistry between Hunt and Gibson builds slowly and eventually finds solid footing at the end.  The look of the film is right on, the advertising agency is multi leveled and efficient, and Nick's Chicago apartment is hip and modern, just like its owner.

Gibson is an engaging and talented actor and I especially enjoyed seeing him dance across the screen to Sinatra songs.  This might be his first romantic comedy, but I hope it won't be his last.