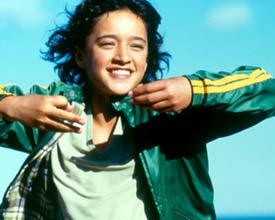 A film that grows from a legend and the subconscious, Whale Rider brings the modern Maori culture alive in the setting of a New Zealand costal town.

Featuring a mature performance by Keisha Castle-Hughes as a resilient 12-year-old named Pai, Niki Caro. This dream-like drama is able to transcend culture and tradition like the feel-good Bend It Like Beckham. This Maori girl is in a precarious family situation with her father (Cliff Curtis) leaving her and his tribe for an art career in Germany. Pai never knew her mother who died giving birth to her and her twin brother. She's being cared for by her grandparents, Koro, well-acted by a strict Rawiri Paratene, and a warm Nanny Flowers (Vicky Haughton).

Caro finely modulates the proceedings from a novel, into a tale that works off Koro's distant relative who supposedly made his way to their Polynesian enclave on top of a whale. And Whale Rider realizes the love and conflict that comes between Koro and Pai as she is drawn to a village illuminated by some striking wide-screen photography.

Gradually, a young woman's strength comes to bear as a stern leader trains boys (not girls) to have his spiritual and martial-arts wisdom. Finally, confusion out of tenderness and tradition leads to a heartfelt scene that expresses strife and adaptation. And through the feisty and layered performance of the young Castle-Hughes who grounds a persuasive arc especially in her relationship with Koro, a rewarding emotional undertow is felt in a mystical haunting ride.