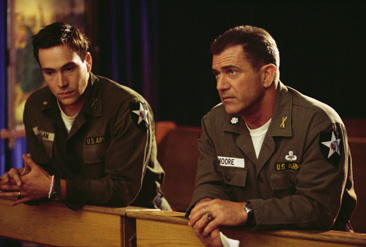 Unlike many war films, We Were Soldiers offers a different view of war and particularly the Vietnam war.  This film shows a gritting style that sucks the audience in and forces them to experience the trauma of this war, the heart pumping need to survive while showing both the best and worst mankind has to offer.

Detailing a battle in November of 1965 in the Ia Drang Valley (which rapidly becomes known as "the valley of death"), we are exposed to the first major battle between North Vietnamese and United States troops.  Director Randall Wallace starts this story at the true beginning of the story.  We are shown the slaughter of a French military commander and his men and introduced to the North Vietnamese commanding officer as he instructs his soldiers to take no prisoners as if they killed all the enemy sent every time, soon the enemy would send no more.  The most interesting change from the standard military film is the focus on the private / civilian life of all involved.  You will be emotionally bonded to every character as you meet their wife, children and families.  This is a strong tool as you feel pain as soldiers are lost and others become heroes.

The story continues as Lt. Col. Hal Moore played by Mel Gibson becomes the leader of the First Battalion of the 7th Cavalry.  Moore is a man of action and honor with a passion for history and military tactics.  Attempting to learn from history and the mistakes of others, Moore scours every detail of past missions and engagements with his new enemy.  While very cold and calculating, we see Moore as very human and kind to his troops and family.  You see the true Moore in the midst of the battle, seemingly everywhere, not in a bunker, but rallying his troops, getting the lay of the land, giving encouragement where needed and the laying of a hand on a shoulder to convey the spirit of humanity.

They story explodes when Moore and his men land and are immediately surrounded by thousands of North Vietnamese regulars who are led by another calculating commander, but one who stays in the safety of a bunker.  For a period of three days, we see carnage on a grand scale for both sides; we see chess like movement and planning by both commanders and we also see the families back home as the notices of death are served.  We see the strength of the wives as Moore's wife Julie (Madeleine Stowe) and the wife of Lt. Geogheagan (Kerri Russell) take over the task of delivering the worst news of all.

The in country footage and battle are spectacular and the supporting cast of Greg Kinnear as the daring helicopter pilot Snakeshit Crandall, the ever present and cranky Sgt-Major Plumley (Sam Elliott) and able right hand man of Moore and an odd addition of photographer / reporter Joe Galloway (Barry Pepper) who ends up fighting to save his and others lives.  The interaction between all the cast, be it conversation or a glance or a simple salute is riveting and allows the tension to remain high all the way through.  One of the most powerful moments is when photographer Galloway is forced to take a gun to defend himself.  You can see the fear, the horror and you know this man will never be the same.

Be prepared as the battle is intense and gruesome.  This is a necessary piece of the puzzle and to have cut camera angle to avoid the gore and the actions of both sides would have negated the entire film.  This is not a film for the weak of stomach.

This is not a film about A hero, but one of honor and the fact that anyone who fights for his or her country is a hero.  We are always taught that the enemy is evil, but that is always the tale of the victor.  We are not shown the North Vietnamese as evil, only enemies as any opponent might be.  This does not make it any easier to accept the horrors you will experience on screen, but when you see the diary of a North Vietnamese soldier with a picture of his wife in it, you will know we are all just men - different beliefs, religions, colors and heritage, but still just men in horrendous situations that will haunt the survivors, torment the dead's loved ones and never truly make sense.

This is a film that can be explained in just a few words: unspeakable horrors, honor, duty, county.  I'm sure there will be one more word to come: Oscar.