We Need to Talk About Kevin 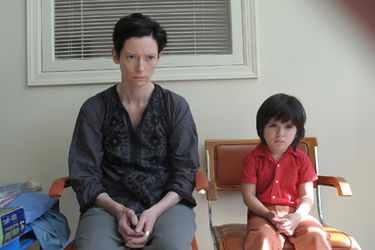 
Mesmerizingly morbid, this new psychological reverse Oedipal drama may be too disorienting and fractured to truly appreciate, but may generate some buzz for the upcoming awards season.

That's because in the case of an un-chronologically constructed We Need to Talk About Kevin there is some strong acting, especially by Tilda Swinton (I Am Love) and Ezra Miller (City Island) as a shattered mother Eva and her eponymous 15-year-old son incarcerated for crime that devastated a community.

Some will contend that director and co-scenarist Lynne Ramsay (who was initially involved with the adaptation of The Lovely Bones) fills her cinematic plate with much stylish panache over inconsequential substance (certain details are left not shown) that will lead to an easy off-putting dismissal. Or for perhaps more provocative, offhanded effect that discerning art-house viewers found in polarizing fare like Like Crazy or Martha Marcy May Marlene.

Nevertheless, from the struggles of Eva to start anew while meeting with her incarcerated (Norman Bates like?) son, a mother recollects back (when she was a successful travel agent) to an inability to connect with him during his upbringing which may have triggered something in him that led to an awful act.

Ramsay uses hues, especially red to heighten a jarring atmosphere that invites horror comparisons to the likes of a Black Swan, as Eva's present-day home is defecated with paint. Providing decent support is the usually reliable John C. Reilly (not as good here as in Terri) as doltish hubby Franklin and Ursula Parker as cute younger sister Lucy in contrast to her brother. Better might be those who adroitly endow the younger Kevin like Rock Duer.

While the conclusion may be foregone for many there are some surprises along the way as the filmmaking benefits from the an audacious hyper-realism captured through the editing and incisive lensing by Seamus McGarvey. The use of dialogue is spare, if efficient to build more apprehension after a period of pretentiousness. A tight-knit tension is complemented by Jonny Greenwood's eclectic sound work.

If those needing to talk about "Kevin" instead of warning others to avoid him will make a case for an unusual elliptical effectiveness anchored by a raw, wrenching Swinton and a disturbingly diabolical Miller. In her case the guilt and grief is more easily seen in her anemic, androgynous presence as recurring image of Eva and Kevin is seem from a drop of water. If Ramsay's splashy meaning isn't comprehensible, then its dark emotional blows won't matriculate with distinct, wrenching dynamism.