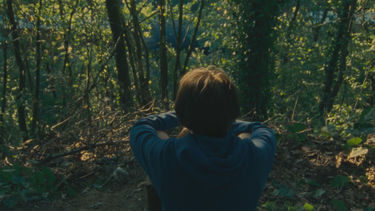 
Another "small and straightforward" film hardly becomes mawkish thanks to Michelle Williams's unglamorous turn in a snippet of contemporary life.

Kelly Reichardt's Wendy and Lucy is shorter than many animated features as it has a trusting canine companion opposite Williams' Wendy.

Wendy is relocating from Indiana to start anew in Alaska, as Reichardt's intimate, gently poignant picture was shot in Portland, Oregon.

When her car gives out in a small Pacific Northwest town, Wendy falls victim to ill-timed events and bureaucracy. After Lucy is taken to a local dog pound, she really begins to hurt, as she feels the bossy and busy-body folks around her.

Reichardt, a co-scripter, and an adept Williams (good in the mysterious, if somewhat hypnotic Synecdoche, New York) help make Wendy's struggle palpable in the midst of a rigid society.

It seems that all may not be futile when there are good samaritans like a security guard, well-played by Wally Dalton. Or, in the woods, from hippies. Older folks, where Wendy is concerned, seem more congenial or compassionate.

There is a grayness to the visual palette that is in sync with the director's rugged naturalism that connects to films in recent years like Monster and The Machinist. Even more so, Sherrybaby, with its persevering rehabbing character acted with raw, flawed perserverance by Maggie Gyllenhaal.

Williams manages a similar result with a different set of obstacles even for a woman of a higher maturity level. Lucy may be different than Sherry Swanson's daughter, but their fractured relationship is an emotional touchstone for the viewer.

Like the aforementioned Monster, one of the titular characters is a physical makeover that the very pretty Williams nicely embraces. With short hair and knobby knees, she makes Wendy's personal troubles meaningful, as her life isn't without Lucy. Wendy and Lucy is told with tenderness and humanity in a brisk journey that has backbone.