The Way, Way Back 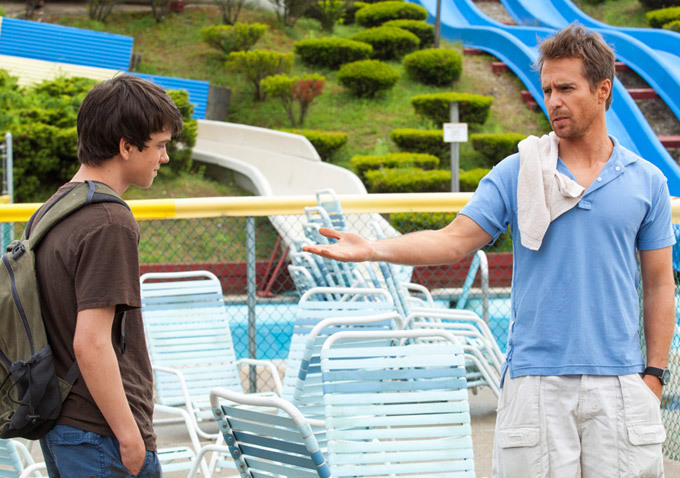 
The material may not be a breathe of fresh air, but a summery, warmhearted crowd-pleaser manufactures a lot from its spry dialogue, a solid cast, and affection for 1980s pop tunes.

Collette's divorcee Pam and new, somewhat bullish beau Trent (Carell) are on a summer vacation back east with her introspective 14-year-old son Duncan, a fine James. On Trent's rating scale, Duncan says he's a six, double what his would-be-stepdad thinks. Pam's a little uptight as excited as she is about the holiday, nervous about how her ability to appease.

At a beach house, part of an annual commune of sort, a kind of "spring break for parents" Duncan isn't thrilled about the juvenile/adult dynamic when it comes to indulging and fidelity. So, in leaving this somewhat overzealous nest, he begins to bond with the next-door neighbor's daughter, Susanna (AnnaSophia Robb) as well as finding the local Water Wizz park. Her mother is done in outrageous scene-stealing flair by Alison Janney (The Help, Away We Go).

Being at this place may remind some viewers of the enjoyably lackadaisical Adventureland and earlier Meatballs as the park's manager Owen, evinced with spry wisecracking sarcasm by a reliably risible Rockwell (Seven Psychopaths) becomes a mentor for the good-natured Duncan (who isn't into his sense of humor). James shows a commitment to the gradual arc of the character that hardly seems artificial. During an important period for Duncan and his mother they begin to realize the opportunity to escape their similar doldrums. Maya Rudolph offers some noticeable support as Caitlyn, Owen's assistant who wishes a more mature path for him.

Directing/writing tandem Nat Faxon and Jim Rash who co-wrote the poignant, perceptive George Clooney starrer The Descendants display their knack for wit and nostalgia within the context of adult bluster and adolescent ambivalence. They nicely set up the mood which is best served in the water park milieu as the relationships that really connect are Duncan with Susanna and with the goofy, charismatic slacker in Owen. Collette adequately senses the emotionality of Pam while Carell relishes what might be the least credible character of the piece, though one maybe more akin with his Proust scholar in Little Miss Sunshine. The Way, Way Back may not be as endearing as that dysfunctional family road picture belied by an unrefined production it's ready-made for angst and epiphany always wanting the best for Duncan.