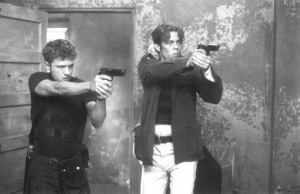 The Way of the Gun

Prepare yourself for a very violent film with many interlacing and intricate plots. The Way of the Gun is not a film that will entertain you, but one that requires you to watch, listen and pay attention.

Many people will list similarities to Pulp Fiction and Reservoir Dogs.  This film stands on its own with a gritty and non polished style all of its own.  Director/writer Christopher McQuarrie, known for his previous success as the screen writer for The Usual Suspects, delivers a thinking person's film which has enough twists to confuse all but the most astute of film goers.

It is remarkable that this film provides us with a huge cast of characters, none of which you will like.  There is no great dialog, but you find yourself championing different characters as the plots are revealed.  The short of the story is a pair of less than smart criminals decide to abduct a surrogate mother of what they feel is a wealthy business person.

These criminals played by Benicio Del Toro and Ryan Phillippe, find themselves pitted against a mob connected, money laundering and vindictive future father in the form of Scott Wilson whom they anticipate will pay anything to get the child back.  Backed by body guards, the plot thickens.

Enter James Caan, as the old hand of the family who is accustomed to collecting the enemies of people for them.  This is the best performance in the film and the weathered look of Caan is suited perfectly for the roll.  This wily old fox knows what needs to be done and is prepared to do it.  There are conflicts between the body guards and Caan, between the surrogate parents, between the kidnappers and even the surrogate mother and would be parents.

This is all rather confusing here, but to reveal more is to destroy the impact of this film.  One word of advice is to prepare for blood violence and plan ahead to get a seat near the rear of the theater and centered on the screen.  The audio and visual effects are absolutely remarkable and with the time to get the proper seat you will not be disappointed.