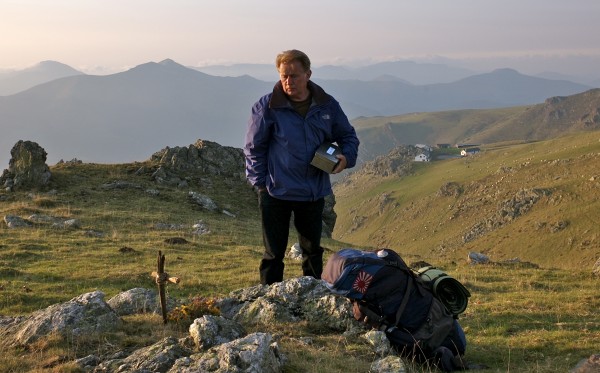 Filled with candor, game in its genuine attentiveness around interaction and recollection, The Way stars Martin Sheen, Deborah Kara Unger, Yorick van Wageningen and James Nesbitt. It may bear some resemblance to Sean Penn's rivetingly meditative Into The Wild and deserves more of a theatrical boast and viewership than its meager distribution allows.

The scribe in Estevez (who did well with a larger cast in a sprawling, soapy Bobby) relates a road trip quite pretty to look at, smoothly edited with a documentary feel about it, and unsubtle in its themes. Estevez's character in Daniel went on a kind of early mid-life global (two-month) retreat losing touch with his family, including irascible California ophthalmologist father Tom (an incisively sound Sheen of The Departed).

The story finds its footing from Daniel's demise on the titular (St. James) route on Camino de Santiago in Northern Spain. A sad, shattered Daniel gets his son in France and decides to follow what was sacred to his son. Some new important, if testy relations come about with some folks in what languishes, but has revelations and resolve.

There's a peppy Dutchman (van Wageningen), an Irish blowhard suffering from writer's block (Nesbitt), a chain-smoking, churlish Canadian (Unger of The Hurricane), as well as French-Catholic lawman (a fine Tcheky Karyo, remembered for his villainy in films like Bad Boys).

Some instances pop up that make Tom feel his son guiding himself towards something important and challenging at the same time. Sheen eases sympathetically into the character's emotional underpinnings becoming a little rough at times during Tom's volatile manner of holding his own. Especially when his knapsack nearly eludes his grasp.

The adept filmmaker who was inspired by The Wizard of Oz lets the mundane and unsettling honestly play out into something personal and reflective. "The Way" often drifts structurally above its unhurried approach as metaphor for personal understanding, as one can start to realize how an off-screen life could have such strong influence. And, indeed, if there isn't quite a dramatic payoff, the nuances and tussles in going the distance can offer a more insightful worldview and renewed perspective.