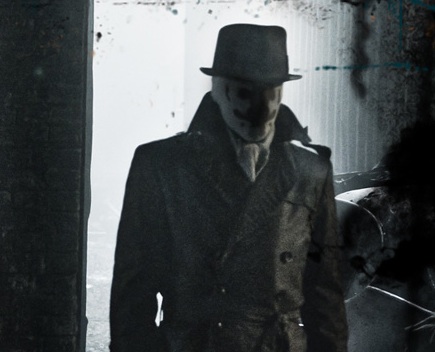 
This long awaited film of DC comic's graphic series was a mixed bag for me. High marks go for the stunning visuals, interesting characters and a great opening sequence, that has a pictorial history backed by Bob Dylan's "Times They Are A Changing."

But it gets low marks for a disappointing ending and explicit violence, much of it unnecessary. A scene in jail has a man's hands cut off with a grinder filled with screaming and spraying blood, when an off the screen scene with sounds would have been more effective. We also didn't need close ups of the action, the point was made very quickly. It is just one of the many gratuitous violent scenes which distract from the mission and point of the script.

Director Zack Snyder's (300) job was a difficult one, he had to keep avid fans happy by staying true to the to the Watchmen story and also get a new audience up to speed with a large cast of characters to keep track of and wrap it in two hours and 40 minutes.

Based on the 1980's comic serial written by Dave Gibbons and Alan Moore, it's about a group of crime fighters who after years have gone their separate ways. These are not regular super heroes but very flawed people with super powers.

Dr. Manhattan, played by Billy Crudup, after a terrible lab accident is a blue hued naked guy who is attempting to find his own humanity, The Comedian (Jeffrey Dean Morgan) is a sadistic bully, Rorschach (Jackie Earle Haley) is in a mask with moving ink blots floating on it - he appears to be satisfied only when killing, Malin Akerman is Silk Specter, Night Owl (Patrick Wilson) is the be-speckled good guy and Ozymandias (Matthew Goode) is the smart one who makes millions off his past personae.

The story is set in 1985, the Soviet Union and U.S. are on the verge of nuclear war, and Nixon is still President after being re-elected to a fifth term. Someone kills The Comedian in a long knock-down, drag-out, deadly fight and the group gets together to find out who is responsible.

These are very troubled characters, and the "R" rating allows for some unnerving scenes. One depicts an encounter with Rorschach and a child killer is especially gory.

Watchmen takes the genre and adds new dimensions rarely seen before. A fan of the series will probably enjoy Zack Snyder's vision, otherwise be prepared for a shocker.

Watchmen is a must-see for aficianados of the comic book series turned graphic novel by Britain's Alan Moore. Yet, this apocalyptic, surreal superhero extravaganza is a bit more ponderous than exciting. The well-known reported disputes of copyright infringement almost lead to its delay, but studio executives hammered through the red tape to the appeasement of fanboys at least in North America and Europe. And, Moore again distanced himself from this project like The League of Extraordinary Gentlemen and, more recently, V for Vendetta.

The ambitious film by Zack Snyder creates a striking visual canvas, even if it never rises to the cinematic aura of something like Sin City. There's an uncompromising power to its look, from the gritty mean streets of New York (with the Twin Towers in the skyline) to the otherworldly.

The seemingly literal translation hones political, psychological, and spiritual themes with an ominous, portentous pop culture feeling. The story posits the killing off of "masks" or costumed (vigilante) heroes who've been relegated to an "average" existence who admirably served as a justice league before being deemed illicit.

After the violent demise of The Comedian (Jeffrey Dean Morgan), an investigation and autobiographical-like flashbacking propels this visually uncompromising celluloid, best seen on giant or (IMAX) screens. A creative opening credits sequence offers some historical perspective on an arguably more dystopian state than V For Vendetta.

Jackie Earle Haley (very good in Little Children) is the brooding, white-masked with shifting black splotches Rorschach who provides growly voice-over as "somebody knows why...one of us died tonight". The ruthless, rather maniacal fellow will get back with the reasoning Dan or Nite Owl (Patrick Wilson of Lakeview Terrace) to do whatever to find out who is behind the murder of those who aren't probably being watched.

Snyder, who made the absorbing, more action-packed and similarly visceral 300, allows the viewer to consider another world of 1985, one where Richard Nixon was still the Commander-in-Chief with Henry Kissinger and Vietnam was ruled a "win".

On the verge of a simmering Cold War, there is an almost all-powerful hero, like a nude blue Oscar statue, Dr. Manhattan (Billy Crudup), once a man named John who morphed from a nuclear lab accident. He ostracizes himself to Mars after his lover, the svelte Silk Spectre (Malin Akerman of The Heartbreak Kid) breaks their relationship as she notices his disconnect from humankind. So, she finds intimacy with Dan, though not without some sexual dysfunction, while getting the teleporting and mind-meld treatment from the astronomical visionary. He's in cahoots with the world's smartest man, another "mask", Ozymandias, an effete Matthew Goode, to make progress in the troubles with global energy.

Crudup's openly anatomically glowing and dividing fellow posits that their "kind" are "too late" to prevent the potential global annihilation as he feels a "temporal interference". Dr. Manhattan's god-like presence will tantalize many, especially females, but the character may be better served through flashbacks than what he projects as he's able to copy himself.

The screenplay, which has at least one distinct change from the novel, allows the characters to deal with touchy issues, many of which are connected to Morgan's brutal Edward Blake. Watchmen doesn't have the vigor of a winning whodunit, in part because the characters, like The Comedian and Rorschach are rather unsympathetic, the latter having a psychopathical quality that works well in a vicious prison scenario (which reminds one of Bad Boys at times).

Haley actually registers noticeably well as the amusingly shady and ruthless Rorschach. He has a decent rapport with Wilson who kind of channels a little of Clark Kent and Bruce Wayne, especially in scenes with the sexy, but too one-note Akerman as Dan has a project brewing in his basement.

Carla Gugino, who original Silk Spectre/Sally Jupiter now swigs martinis, is a part of the film's more graphic elements. And, she's actually less than 10 years older than Akerman who plays her daughter, Laurie Jupiter, who finally has a shocking awakening. The wicked nature of the comic book is felt in many of the action sequences when there isn't pause for sexual tension, irony or pungent line readings.

In spite what some may view as too silly, twisted, and convoluted, Snyder still manages to make the bleak atmosphere fit the enormous logistics to pull off the story in a rather exhilirating way. A hardly whimsical Watchmen may not overcome its lamenting, overwrought leanings, but it's more provocative and challenging than most in the genre, a graphic, complex recreation with classy production values (the soundtrack ranges from Nena and Nat King Cole to Bob Dylan) ultimately achieves peace through destruction.