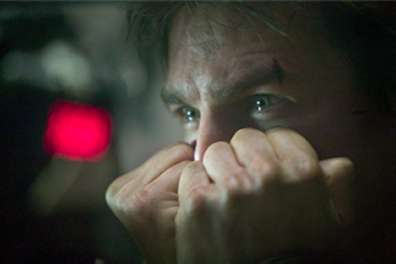 
H.G. Wells first published his novel War of the Worlds in 1898 and Orson Welles made the story of alien invasion radio legend with his Halloween Mercury Theater on the Air production which scared the life out of some in the radio audience on October 30, 1938. In 1953 famous science fiction producer George Pal brought the story to the big screen with very effective special effects which won the film an Academy Award for the creation of the creatures and their space vehicles.

With the use of CGI available it was inevitable that the film would be presented again. This time it's Steven Spielberg who directs the invasion of Earth as seen through the eyes of Ray Ferrier (Tom Cruise), daughter Rachel (Dakota Fanning) and son Robbie (Justin Chatwin).

Spielberg has two distinct missions in his production, first to depict the invasion and mass destruction of human kind using what he has become famous for - special effects, and second, the plight, desperation and determination of the small family on the tapestry of the apparent end of the world as people have known it.

The first hint of danger comes just after Ray leaves his job as a crane operator on the docks in New York to spend some time with his kids; they live with his former wife, and he has little connection with his daughter and son. Lightning and storm clouds suddenly come up and Ray finds it strange that the wind is blowing toward the storm rather than away. As lightening strikes there is no thunder and suddenly everything magnetic and electrical (sounds like The Day the Earth Stood Still) won't work. When bolts of electrical discharge penetrate the street Ray joins his curious neighbors as the hole becomes larger and a gigantic machine with squid like tentacles moves up splitting the street, Santos' Florist and the local church in half. As Ray runs like hell to his kids many folks are incinerated by the creature-run machines.

The script gives us a break from the bleak occurrence by inserting comic lines between the main characters as when Rachel says she is allergic to peanut butter and Ray says since when, her reply is since birth. She orders from a health food store and Ray can't eat the stuff. That loosens up the story but also makes the point that Ray has not been an attending father to his children. His knowledge of mechanics does help later on but it has become overbearing - he has a broken down engine block in the kitchen. Also on the lighter side Ray is disappointed to find a Red Sox hat on his son while he wears a Yankee symbol.

While sound punishes our ears the screen goes black and all communication is interrupted. A CBS mobile truck reporter shows the destruction is world wide and when Ray asks what's in the lightening the reporter says "That is Them," another reference to a classic Science Fiction flick.

After stealing the only car that will run there is more moment humor as Ray insists Rachel stay in sight on a bathroom break, she is not likely to give up her privacy, but it leads her to a river bank where hundreds of bodies are floating down the stream. From this point on there is fear in her eyes.

Their goal is to reach the mother who is in Boston, to do so they must cross the Hudson while battling for space with hundreds of other refugees. At that point the invading machines give off defining sounds which remind us of the tones in Close Encounters of the Third Kind.

As the tension and fear mount the three must overcome a vortex in the river and the giant squid like creatures in the air. Ray must make a Sophie's Choice decision with his two children. Now the film is strictly about the family and its ability to survive in the up-side-down world.

In a farmhouse Tim Robbins' character protects and frightens and requires Ray to take drastic action after they hide on the other side of the mirror from the alien probes. We also begin to see a Dracula taste for blood on the part of the invaders.

Spielberg again shows he has the touch, he brings spectacle through effects, emotion, comedy and fear from his characters, who eventually endear themselves to the audience as they scramble for life in a world that appears to be dying.