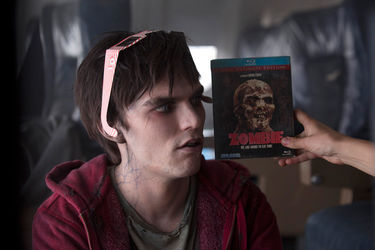 
Another movie to plunder the undead genre from the studio that brought you the Twilight franchise is the quirky, somewhat amusing Warm Bodies.

It's from the director of the winning 50/50, Jonathan Levine, and stars Nicholas Hoult (X-Men: First Class) and Aussie actress Teresa Palmer (I Am Number Four).

How much you enjoy Hoult's "R" whose narration may be overbearing for some could be crucial to the entertainment quotient of a zombie romancer that doesn't neglect genre conventions or Shakespeare for that matter.

Hoult's dead character is referred to as R (an avid record album collector) because that's the letter that may have begun his name when among the living, but stumbling upon a living creature for nourishment changes his mindset. His emaciated, bloodless body which grunts like his similar kind (and dwells within a jumbo jet) after an apocalypse of sorts (with offshoots maybe similar to some when it comes to 28 Days Later and Shaun of the Dead) has an affection for Palmer's blonde, comely Julie whom he must keep and pass off as his own kind.

John Malkovich's militant human survivor happens to be Julie's dad and constructed a huge wall around the city. He isn't so keen when Julie begins to warm up to the feelings that this odd, pretty inarticulate being with lines like "Don't stare...I'm staring; it's a little creepy" has developed for her.

You don't get much subtext or exposition from Levine as to the predicament and disposition of R obviously as the pallid zombies as a whole don't have the mental capacity to handle themselves like a human being. But, there's something about R that could alter the lifelessness and reset a volatile playing field. There's gotta be some violence and action to appease a crowd which may be expecting something more like the small-screen cult favorite The Walking Dead.

Warm Bodies doesn't really boast a well-developed storyline from its premise and perspective around a corpse who embraces a new self. Hoult and Palmer, (who may be adequate substitutes for Robert Pattinson and Kristen Stewart), through R and Julie (short for you know who) find a somewhat palatable, pithy connection that may be valued more by an instant messaging social network savvy community.

If Malkovich is just slumming through an easy part, there's Rob Corddry (Hot Tub Time Machine) to add some wisecracking zest as another zombie apparently close to R, "M." This balding corpse begins to speak more than grunt when finding out R's secret while drifting from the pack.

Part of this makeover also includes Analeigh Tipton (Crazy, Stupid, Love.) as Julie's confidante and Dave Franco as Parry, Julie's boyfriend who made a decent impression in last year's wild, buddy romp 21 Jump Street. Parry and Julie have a little backstory thanks to R's digestive insight to their past with Franco standing out most during an oddly effective dream sequence.

What may seem shambling, and stumbling like the creatures terrorized (like the humans) by the feral, lithe wraith-like Bonies doesn't really get too bogged down in sentiment. Exhumed by a frothy fondness for heartfelt connection and remembrance, this cinematic warming up is accentuated by some well-calibrated, arrayed lensing by Javier Aguirresarobe (The Road) and a dash of the Bard (key up the balcony scene) puts these creatures in a less dreary, albeit fantastical light.