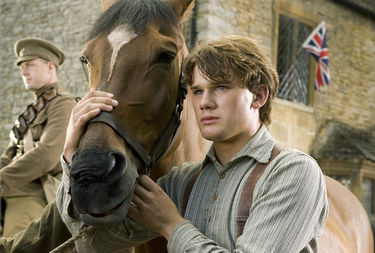 
War Horse reminds us of Black Beauty, but the extended complexity of Joey's (The Horse) journey stretches understanding and diminishes our ability to follow the flow of the Spielberg film and script.

The script chronicles the friendship between Albert (Jeremy Irvine) and Joey from the beginning of World War 1 until their return home after the armistice which ended the war to end all wars.

Early on Albert's father out bids upper crust Lyons (David Thewlis) for Joey, placing his family in a position which might cause them to lose their small house and farm. The farm was in need of a work horse that could pull plows through rugged stony hillsides. Joey's first triumph shows through as he plows a turnip field filled with rocks. The father who spends much of his time drunk is impressed and we learn he was a decorated soldier from the Boar Wars in South Africa; his war decoration becomes a flag which Joey carries throughout the story.

As World War I approaches we see eager young Englishmen eager to sign up to fight in a scene that mirrors the foolish southerners who could not wait to join the battle which would destroy the American south in Gone with the Wind. The army also drafts Joey but Albert is too young to follow. From there Joey travels at a brutal pace, particularly after his capture by the German army. He is required to pull cannons up hills and through valleys. The sprit and determination of the horse impresses even the German horse managers.

On his way to his destiny Joey become the pet of a young French girl Emilie (Celine Buckens) who hides the horse in her bedroom with the help of her grandfather (Niels Arestrup). Joey and a companion black horse (Tophorn) along with Albert and his brother Ted end up together protecting each other near the end of the war. In the most dramatic scene using a white flag English and German soldiers work to free Joey who has impaled himself on a barbwire fence between the lines of the opposing armies.

The horse is the star of the film and horse master Bobby Lougren impressively manages the scenes to the point where we almost recognize the emotions of the animal. The film however graphically displays an antiwar message in some cases through ugly brutal battle scenes. It is not a warm story but does stress the beauty of the horse.
Even with the beauty and powerful dramatic scenes and the necessary violence this is a very good film but not an excellent one.