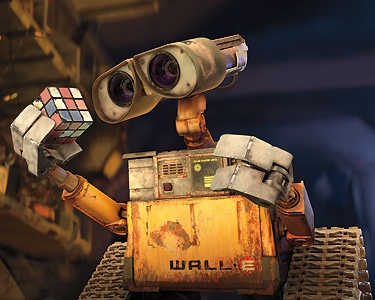 
The Pixar studio group somehow expresses complex thoughts and much emotion in the winsome, post-apocalyptic Wall-E, another wonderfully animated motion picture. There latest creative flourish comes after the lively animated short called "Presto" which puts a nice "Looney Toons" variation on pulling a rabbit out of an unsympathetic magician's hat.

There aren't any other models running so imagination spices up his desolate existence, as there is a friendly cockroach nearby and a working video of 1969's "Hello Dolly" (no Barbra Streisand or Walter Matthau in view).

A white, sleek probe droid called EVE (extra-terrestrial vegitation evaluator) with some personality meets up with Wall-E. After they begin to connect, however, a small living plant in a boot allows for a programmed side to take over.

Much, if not all of the first reel has no dialogue, as the attention to robotic nuance allows for much viewer interest as the story begins to take hold.

Wall-E follows EVE back to Axiom, a mother ship, which has many humans who have descended from those of a tubby nature. Two of them, John and Mary, are voiced by John Ratzenberger (a Pixar regular) and Kathy Najimy.

Wall-E sensitively synthesizes into something quite affecting and more taut than anticipated with an ever-so-slight imperfection that stylishly blends the robotic steel, cartoonish humans, and live action footage.

As in the outstanding oeuvre that includes Toy Story, the "communicating" robots here have distinctive traits, as the last act finds a mismatched animated group in a beat-the-clock scenario with even a couple of ominous larger versions of Wall-E.

One of Pixar's distinguished staff, director/writer Andrew Stanton (Finding Nemo), produces something so heartfelt that it connects so well on a personal level. His work with individuals who believe in the wit and clarity of their product, as there are influences from seminal sci-fi pictures like Star Wars, Blade Runner, and 2001: A Space Odyssey. Nice satirical jabs at corporate life and technology emerge with a conglomerate here called B&L - Buy-N-Large. Wall-E definitely has something to say about today's complacency and overriding waste, but it more than dots itself as a captivating love story.