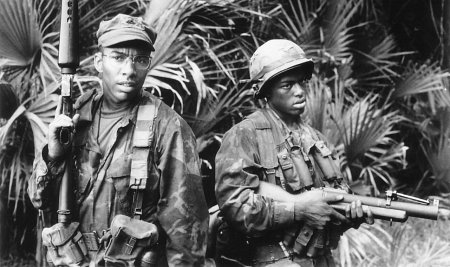 
Four very stereotypical Marines are featured in a poorly scripted Vietnam drama, filled with flashbacks depicting the reasons for their enlistment.

CPL Pippins (Roger Floyd) is a white soldier who joins the four. He is the most disturbed and vicious character in the film. He escaped to Vietnam to avoid the police and rival Latin drug dealers. He is violent and crazy. All the roles are hollow and offer little depth for the performers. Pvt. Hoover Branche's (Eddie Griffin) character is not only hollow, it is filled with nothing but ugly, obnoxious phrases which are so overused they numb the audience. His work in Jason's Lyric was far superior.

Pfc. Cole Evans (Allen Payne) is the idealistic family man who is in the service because at home he could not rent an apartment due to discrimination. He was terrific in New Jack City. Pfc. Joe Brooks (Vonte Sweet) joined the service to impress his girlfriend. It's a tough lesson for the young man to learn. Sgt. Barkley (Joe Morton, The Brother From Another Planet) is a minister who turned violent when he caught his wife having sex with another man. His part is the most interesting.

Sent to free American prisoners, only the five survive to face an overwhelming attack of Viet Cong. The tensions of the disrupted mission and the flashbacks make up the film. Interlaced between the fire fights, the characters smoke and yell at each other while attempting to avoid the Viet Cong, a strange pattern of behavior when attempting to hide from the enemy which has surrounded them.

There is no mention of tension between black and white soldiers in a war situation. The script simply provides four stereo typical characters to exploit.