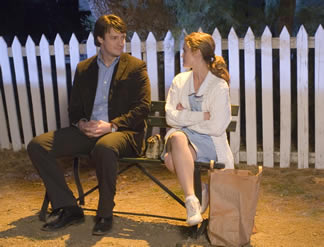 
This Southern comedy starring Keri Russell (The Upside of Anger) is a pretty endearing confection directed, written by, and co-starring Adrienne Shelly.

Shelly has the right ingredients for even those outside of the chick flick territory to savor a smooth creation about an insecure pie maker.

Russell, in her best big-screen role to date, is luminous as Jenna, stuck in a loveless marriage, trying to make it through her small-town waitressing doldrums by baking pies. Jenna's life gets more hectic when she finds out at Joe's Pie Diner, where she toils, that she is with child.

Jeremy Sisto's Earl is Jenna's unsympathetic significant other, hardly the sweetest of spouses. So, one of her pies bears the name "I Don't Want Earl's Baby Pie."

An appointment with her gynecologist, the edgy Dr. Pomatter (Nathon Fillion of Serenity), becomes an arousal that leads to her preparing another pie. On a chocolate crust she presses blackberries and blueberries, thinking of what might lie ahead for her.

Shelly has made something tasteful and breezy built around real characters and situations that is relatable, in spite of what may seem too Southern and cloying.

Flavorful support is offered by Cheryl Hines (RV) and Shelly as two of her dissimilar co-workers. Hines's Becky is amusingly upfront and Shelly's Dawn has a more timid side. Sisto and Fillion add some color to the proceedings, and Andy Griffith is fine as the soft-hearted, but crusty Old Joe who has some advice for Jenna.

The presentation by the cast and crew, especially a risible Russell, reflects the comfort provided by Shelly, who sadly was killed last October in her New York residence.

Waitress may be bittersweet at its conclusion knowing that Jenna is starting anew with Shelly's own young daughter, yet the truthful, passionate execution is simply irresistible.