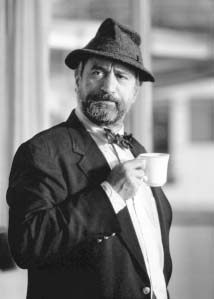 Dustin Hoffman shines as a Hollywood producer called on to distract the American public from a presidential scandal in this dark, amusing film.

Anne Heche plays a White House aide who enlists the help of Robert DeNiro, a political spin doctor, when the President is involved in a sex scandal with a young girl just days before the election.

They come up with the outlandish idea of pretending that the U.S. is on the brink of war with Albania.  They decide to film a teenage actress dressed as an Albanian peasant running from burning buildings and hope that the citizens will buy it while watching it on their nightly newscasts.  If it's on TV, it must be true...right?

Little does anyone know that the eccentric producer is pulling out all the stops to tug on the public's heart strings.  He has an uplifting anthem written by Willie Nelson, product tie-ins to commemorate the war, and a real life American hero (played by Woody Harrelson).

The characters have to think quickly on their feet, as one after another of their ideas starts to unravel.  Can they really pull this off?  Can the public really be that gullible?

As over-the-top as the premise is, you still have to wonder just how much political nonsense has been force fed us already.

DeNiro is believable as the matter-of-fact, take-charge Mr. Fixit.  Hoffman, however, has the funnier role and is simply terrific as the producer who gets caught up in his own hype.

A clever and funny script with great performance makes Wag The Dog a very satisfying experience.

It is rated R for adult language.