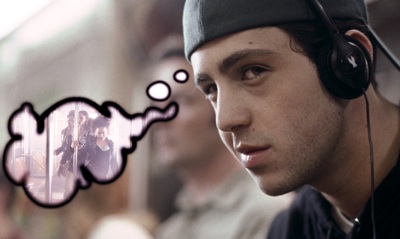 
Adolescent angst with its growing pains is nothing new in independent cinema, and it's done with some nostalgic, slangy flair in The Wackness.

This rather mature, adult look at growing up in the mid-90s during a sweltering summer in Manhattan around the time Rudy Giulani was cleaning up areas like Times Square observes the rise in rap music.

The sensible, yet stuffed scripting by director Jonathan Levine (All The Boys Love Mandy Lane) hitches onto social reticience and teenage frustration through Luke (Josh Peck), "the most popular of the unpopular".

Learning to cope and living for the day is part of the film's mantra as the drug-addled Luke has a customer and doctor in psychiatrist Jeff Squires, a hirsute Ben Kingsley adopting a weird New York accent.

The Wackness distinguishes itself through what the anxiously swaggering kid and the high and high-minded shrink glean from one another. Squires is in a frigid marriage with his wife, an underused Famke Janssen, and Luke becomes taken with his precocious, if sometimes uncertain stepdaughter Stephanie (Olivia Thirlby of Juno).

A melancholic, narcotized Squires and the missus will attempt a rekindling through a Barbados sojourn as Luke starts to accept the phobia of being a high school graduate. The hazy days of summer finds many disparate elements that wryly perseveres through a final reel filled with more sentiment. Audio and video period touches with mix tapes tenuously fit in with the characters precarious positions, as Luke's parents try to keep their place on the Upper West side.

Kingsley does quite well as the weird hippie in Squires who has his way with a dreadlocked Mary-Kate Olsen, barely legal and finds glee with a Jamaican drug dealer (Method Man of How High). The adorned actor obviously likes his gonzo against type role and it helps Peck etch out someone with as much insecurity under his cocky demenaor in need of support.

If The Wackness is too contrived and dapples too much in music-video lore, the desaturated widescreen lensing and swift transitioning (with slow-motion) keeps one in tune to how charming and heartfelt the harmony of misery and awkwardness can be, even during sounds of silence.