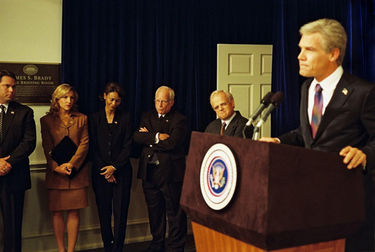 
Oliver Stone's latest biopic W. isn't controversial and rather non-judgmental as the "then" sections are more interesting than the "now" ones about George W. Bush. This singularly American Story with the titular character illuminated alone in a Texas stadium emphasizes a land of opportunity.

This truncated, unproselytizing look at the current very unpopular U.S. president might have been done with a little haste by Stone on a lower budget to be seen before the upcoming presidential election.

Starring Josh Brolin, Elizabeth Banks, Ellen Burstyn, James Cromwell, and Richard Dreyfuss, among a relatively large cast mostly too non-distinct, W. is suppressed in its mood overrall not to be considered in satirical terms. Also, too "early" in its depiction of its subject manner to be a deeply insightful, piquant docudrama (what it feels like).

The mostly solemn entertainment on hand reflects the frugal production as one looks at the primary ups and downs of Bush's momentus life where it concerns Laura Bush (Banks), his religious faith, and the Iraq War.

Stone doesn't shun a Freudian influence here with the turmoil, even drollery between father George H.W. (Cromwell) and son George W. (Brolin of No Country for Old Men) as he works from what really is a microscopic point-of-view.

The key that the director of World Trade Center and scenarist Stanley Weiser use is Bush's Born Again "calling", a transformation which would lead him to the White House. The odyssey pivots unchronologically in three acts with much sedition in the first while the second works from evangelicalism leading to bipartisanship as a strong-willed Bush goes from running the Texas Rangers to a two-term Texas governor.

The flashbacks into a Yale and Harvard grad who had a wild side as he dallied as an oilman are strikingly episodic in nature and numerous. Yet, they project more (through interpretation) than about half the movie which concentrates (only) on Bush's first term (especially after 9/11 to the spring of '03) when he felt it necessary to attack Iraq.

As a game, Brolin (as the younger and older Bush) does more than a passable impression of a flouncing cowboy of a man who unlikely reached the a nation's highest office, a pariah of his own family, including more cuddled son Jeb (Jason Ritter). Even friends and advisers weren't advocates of his most coveted aspiration. The heavies here are Dreyfuss's devious Dick Cheney and a less demonstrative Scott Glenn as Donald Rumsfeld. Many of the characters like Burstyn's Barbara Bush and Thandie Newton's Condaleeza Rice, as well as Karl Rove (Toby Jones) and Colin Powell (Jeffrey Wright) are too underwritten to make an impression as Stone hits the important point about fighting to overcome the odds, especially when it concerns family.

Though W. jumps around from the mid 60s, to the early and late 70s and 80s, this fact-based tale isn't the biting, artistic cinema some might expect from the maker of Nixon and JFK. As Bush is getting ready to depart as the leader of the free world, the world may be undergoing what seems like Greek tragedy and too many (in the US) and around the world are in need of the turnaround he had when he reached 40 years of age.