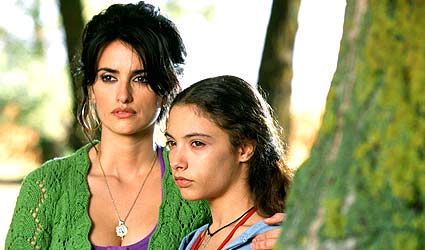 
In Spanish with English subtitles, Volver ("to return") is a drama that appeals especially to mothers and daughters with a special humanistic touch about it.

Penelope Cruz reveals more range than ever as the busy Raimunda who's trying to hold her family together in present day Madrid, aspiring to be her own boss someday.

Pedro Almodovar's female-empowered picture, arguably as exquisite as All About My Mother, has death all around it even though it feels rather carefree and exudes much warmth.

Raimunda, in Almodovar's screenplay, influenced by the likes of "Mildred Pierce" and "Arsenic and Old Lace", will have much on her plate as her aunt and her self-centered spouse (Antonio de la Torre) will suffer the same fate. That leaves Raimunda and her mid-adolescent daughter Paula (Yohana Cobo).

Sole (Lola Duenas) is Raimunda's sister who'll have an unlikely meeting with their deceased mother, the wonderful Carmen Maura of Almodovar's Women on the Verge of a Nervous Breakdown. Dealing with the past becomes important, as the mysteries will include a longtime friend (Blanca Portillo).

Almodovar layers the emotions with subtle complexity that the performers embrace, especially Cruz, whose Raimunda is edgy and vulnerable, but strong when she needs to be. How people need people to get along even when they aren't physically present is felt in ways that show how we don't like our lives to dangle very much at all. Whether singing a song or cleaning relatives' graves, Volver is situated in life with all of its potential bittersweet, surreal trappings fulfilled, as the sadness and everyday humor never leaves us, just like the dead.