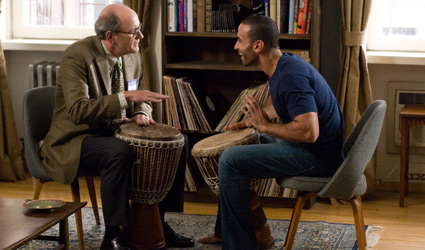 
Tom McCarthy's follow-up to The Station Agent turns out to be quite a fit for longtime character actor Richard Jenkins (The Kingdom).

This tale of self-discovery does comment on U.S. immigration policies, but McCarthy knows how to make a low-budget effort work without too heavy political leanings. Unlike more charged, yet less successful pictures like Rendition.

Jenkins, perhaps best remembered for HBO's "Six Feet Under", and often catches the eye of directors like the Farrelly and Coen Brothers, is "sleepwalking" economics professor Walter Vale.

The early 60s bored man comes back to the Big Apple for a lecture at NYU finding his hardly occupied Manhattan flat not so vacant. It seems two immigrants, Tarek (Haaz Sleiman) and his sweetie Zainab (Danai Gurira), were taken into renting Walter's usually empty place.

Walter hasn't really absorbed the melting pot of life around him, and he collects his thoughts to allow the packed couple back to stay (at least for a while). Sleiman brings an outgoing nature to Tarek who serves as a moderator between a concerned Zainab and the more inward Walter.

The widower isn't getting much out of his academic career so The Visitor gains much admiration from his adjustment to real life. One engaging moment is Walter's eavesdropping of Tarek drumming, and Walter takes a liking to what his new guest does so well. So much so, that both eventually pair up at a Central Park drum circle. Who would have thought Walter would have felt so comfortable with a t-shirt and bandana on?

At this point the internalization of Walter has been made so vivid by Jenkins, that his character has to contend with Homeland Security once the undocumented Tarek is yanked from the outside world.

Tarek's mother, Mouna, well acted by Hiam Abbass, is able to reach him, and develops a tentative, yet sweet relationship to Walter, his only chance to return and embrace his passion for life and his heritage.

Maybe McCarthy could have been more selective in some of his shots obviously in favor of what America was founded on, yet there's a nice positive, humanistic trend that isn't hardly diminished. Even when the concluding scenes in an airport and subway station don't quite click, there's Jenkins doing something so full of life that goes to show that a second act isn't out of the realm of possibility at any age.