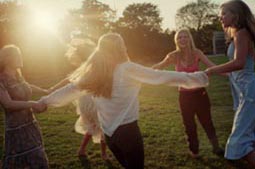 Sofia Coppola handles her first motion picture directing and writing assignment with minimalist power in looking at teenage suicide in the 70's in a misty, even dark tale speckled with wit, that is intriguing, with an intrinsic, unsettling nature that almost unfolds as a mystery.

Coppola has the right feel for a Michigan suburb setting around the mid 70's and tempers her Suicides compared to the more derisive approach of 1989's Heathers.  Her new film, showcased at Cannes last year and Sundance 2000, is propelled with less action and no big names in the cast.  It doesn't cater to the recent genre in teen films, and it is perceptive from her discernment of how an average, middle-class household can break down.  Much of the intrigue is derived from its interpretative quality.  She uses the format of Jeffrey Eugenides' 1991 story in a rather novel way, from the male point of view.

This tale of the Lisbon sisters evolves with elements of horror and fantasy, longing and introversion.  Coppola maintains small doses of humor along with the more brooding aspects that move in and out of the subconscious, though not as palpable as in Heathers.

Unsuccessful in her wrist slitting, covered over by beaded bracelets, she lets a therapist (a cameo for Danny DeVito) know that it's tough being a young teen.  The homebound Cecilia is treated with extra love and care by all, especially Dad, who, thinking her act was an accident, convinces the strict mother to allow the girls to throw a party in the basement with boys at the request of Scott Glenn's solemn Father Moody.  Soon, Ribisi's literal account sets up the shock, which is discretely handled for the desired effect.

While Cecilia proves a haunting presence whether in a bedroom or on a tree, the rest of the movie features Lux, a luminous, audacious Kristen Dunst.  Lux has desires and passion resulting from her meeting a school hunk (John Hartnett) who is enamored by her and finally gets her parents approval, with all the girls going to a dance.

But, after an intimate scene at a football field, Lux's bond comes undone and the family retreats into isolation.  Lux's self deprecation on the roof and the boys' scheme, urged by Lux along with vinyl messages on the phone, lead to the obvious, yet upsetting ending.