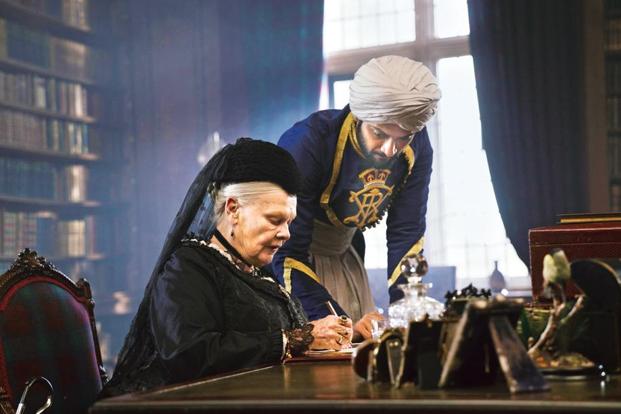 
Set in the late 19th Century, Stephen Frears' latest venture with Dame Judi Dench isn't as successful and nuanced as recent outings (like Philomena or Mrs. Henderson Presents) but it still has a welcome genuine warmth about it. Also, a lustrous visual quality in terms of lensing and design which highlights at least a couple of sequences to accentuate the period and emotional content.

Victoria & Abdul has the inimitable, aging Oscar-winner reprising a royal role two decades ago in the winning Mrs. Brown that she easily fits into again. Scribe Lee Hall (Billy Elliott) peels back a lesser known part of Queen Victoria's life. The period where she becomes more than an acquaintance of a much younger and taller clerk from India, Abdul (Ali Fazal).

Abdul treks to Great Britain with partner Mohammed (Adeel Akhtar) for a typical assigned rite to present a gift (medal) from his homeland. When he accidental looks directly at her, the regal woman appears to be enkindled in a new way. Soon, Abdul becomes her personal footman and also her Munshi (or instructor) as she attempts to learn Urdu (or Hindu).

Of course, the Buckingham Palace inhabitants aren't pleased with this arrangement, particularly Victoria's offspring in the Prince of Wales, Bertie (an impersonal, fazed Eddie Izzard). But, she won't let him do anything about this outsider who intrigues her. Bertie will become the heir to the throne as King Edward VII (if you remember The King's Speech).

Naysayers may not find a lot of this cross-cultural stuff that compelling, and as likable as Fazal is, Abdul isn't that well-rounded. How the bigotry and elitism figure into the narrative may fall short in terms of moral ambivalence to fit into Frears' amiable, lighter tone. But, having the usually delightful Dench reign supreme again (perhaps in a lopsided way) should be met with much approval from the likely demographic and beyond.

She finds a decent comfort zone with Fazal, as the Queen and her footman develop an affecting connection (which somewhat recalls the recent Intouchables when it comes to class and racial divide). And, Victoria & Abdul in its complacent charm has some capable character actors subordinating the leads well enough like Paul Higgins, Olivia Willliams, Michael Gambon and the late Tim Pigott-Smith (to whom the film is dedicated and has appeared often in cinema like V For Vendetta, Gangs of New York and The Remains of the Day).