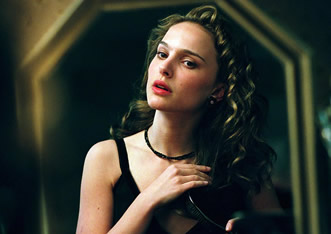 
Another graphic novel is translated to the big screen with creativity, though V for Vendetta doesn't have the narrative clarity nor vision given the stimulating, if politically-charged themes.

Larry and Andy Wachowski have compacted the source in ways that capture the mood of George Orwell's "1984" in a gritty manner that belies a competent, if unspectacular production working from a dystopian Great Britain.

A prologue shows the treasonous Catholic Guy Fawkes trying to blow up Parliament in 1605 and after the opening credits the populace in 2020 is dealing with upheaval after a mysterious viral epidemic. A neo-fascist state has taken over with their approval, led by manipulative sovereign Chancellor Adam Sutler (John Hurt).

A low person on the totem pole of the government-handled TV station is Evey (Natalie Portman of Revenge of the Sith) who is the deeply bruised main character avoiding brutality early on by thuggish agents called Fingermen.

Evey is kidnapped by the film's titular protagonist, V (Hugo Weaving), a disguised avenger out to unleash hell on London's demagogic machine. Sutler enlists a cop Finch (Stephen Rea) and his assistant Dominic (Rupert Graves), as well as one of his minions, Creedy (Tim Pigott-Smith), to capture V and Evey.

The pacing in the Wachowskis' script reflects the subtleties in what is happening around V and Evey, but without the swifter quality thought out in The Matrix. The dialogue is sometimes harder to digest, similar to that film's sequels - Reloaded and Revolutions- abundance in the philosophical.

An unvarying regularity has Finch and Dominic conducting their investigation while V offs those deserving of his vengeance. James McTeigue, assistant director to the Wachowskis, tries to create some effective imagery for the characters to work from without imposing little digital effects. The relationship between Evey and V (with rose in hand) bears similarity to Phantom of the Opera with more of the ideology insinuated with the romantic. Evey, like Christine in the elegant opera house, tries to understand what is happening to a nation and why V is pugnaciously rising against it.

There are moments of raw emotion, and Portman is able to express the pain of Evey whose head is shaved after being captured and tortured. Yet, her character is more subdued and less involving than in Closer or Garden State. She doesn't have the desired chemistry with Weaving who does the most behind a white mask and helmet with dark long hair like Cleopatra for near the entire running time. No grandstanding on V's part, more Shakespearian in tone, light in body and vocal expression.

Yet, the direction hardly plays to the strengths of such a gifted cast. Rea is engaging as the haunted cop and Stephen Fry (recent host of the "BAFTA" awards) is adroitly wry as a television personality. The final stages have more in the way of action that one might expect from the Wachowskis, less innovative, but explosive and cascading in its own right, notably in a sequence involving dominoes.

The leftist political undercurrents might be at odds with the brave attempts to italicize the edgy, provocative dichotomy of terrorism. Some may feel the jolt in the systematic simplicity to what might be done to nobly fight the power. However, the intriguing premise doesn't prove as bracing as the stylized atmosphere V for Vendetta compromises emotion and depth in a thought-provoking, but labyrinthe totalitarian matrix.