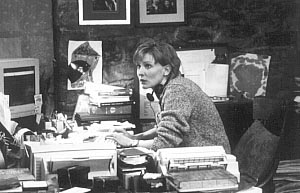 Veronica Guerin is the tale of an intrepid crime reporter who took on Dublin's drug barons in the mid 90's.  Cate Blanchett plays the journalist who was revered for giving her life while writing for the "Sunday Independent."  Working with producer Jerry Bruckheimer and director Joel Schumacher isn't really a galvanizing performance by Blanchett, an Australian-trained high-caliber actress, because the story lacks the necessary emotion to make one understand the motives behind the price for obtaining the truth.

Schumacher's latest outing after Phone Booth has more of a Hollywood sheen over it than the kind of grittiness that should have developed between Veronica and the nefarious, scary gangster John Gilligan, sharply done by Gerald McSorley.  The title would make one believe that this tale is a biopic, but it only covers the last two years of her life and there seems to be a naggingly manipulative gloss over the production and script from Carol Doyle and Mary Anges Donoghue.

Blanchett, whose acclaimed work has ranged from Elizabeth to Bandits and illuminates her scenes in the first two installments of Lord of the Rings, is game in a versatile role.  Guerin was a former accountant, loving wife and mother who shrouded the hazards involved with what she put into her occupation that had her leading a double life.  But, it never really has significance as the obsessive workaholic unrealistically keeps her domestic life fairly peaceful.  The hectic pace of the newsroom is captured in a maze of cubicles though not much feel is brought to the daily grind of filing and deadlines.

Veronica has an innocent quality in heeding to the word of Mafia types and is at their mercy with physical and emotional wounds as she charms them with her feminine wiles.  Some may think that she wasn't going about it in the right way that may undermine what Blanchett usually gives to her fully-rounded characters.  There are some persuasive scenes as a dance of death with Gilligan unfolds.  A fascination is evident in passion to one's beliefs as drugs led to much violence throughout Dublin.  But all the terrible warnings don't offer much of an emotional connection for the audience as Veronica is the crusader who knew danger was lurking, but too naive as her faith seemed to shut off any display of fear.

Even if Schumacher has made a film with few surprises and an ending which doesn't personalize the legacy of an important investigative journalist, there is some intriguing flirting with important issues as Blanchett is unflappable opposite her mother, a forthright Brenda Fricker, and the malevolent Coach" Tranyor (Ciaran Hinds).  A sympathetic figure emerges with little depth into who really got into her job of naming names with fame unable to survive a cold, brutal Dublin.