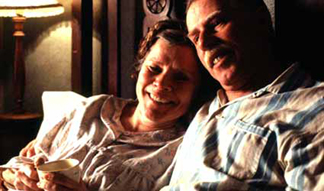 You may have heard her voice in Chicken Run or seen her in a lesser role in films like Shakespear In Love. British actress Imelda Staunton was a 40-something police officer in "Crush." In the title role of Vera Drake, Staunton is quite extraordinary under the direction of Mike Leigh (Secrets & Lies).

It’s 1950 and in London Vera is a house-cleaner for rich neighbors. She epitomizes the role of Good Samaritan when it comes to her mother and ill folks unable to get out and what they need for themselves. This is in addition to looking after her husband (Phil Davis) and adult kids, played by Alex Kelly and Daniel Mays. By the way, she “helps young girls out”when they happen to become pregnant. Only childhood confidante Lily (Ruth Sheen) knows about this later part. The screenplay by Leigh really takes hold from the effect on Vera’s life when something goes wrong.

There is much resonance from the aspect of a taboo subject not long after World War II and Leigh taps into so much unexpected feeling with nary anything maudlin about it. Staunton’s richness as a character actor shines in remarkable fashion in a touching, understated tour de force. How the wit is blended with social issues and personal hardships is also done amazingly well. Vera Drake is complex, involving, and highly emotional.