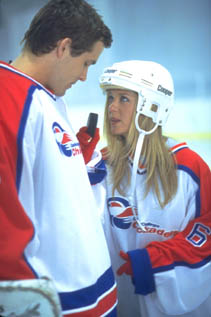 In typical irreverent National Lampoon style, the current saga of Van Wilder is a great romp though the college days.  The story is based around Coolidge College, its frats, educators, love and revenge.  Van Wilder, played by Ryan Reynolds, is the BMOC (Big Man On Campus) and while most of us complete or stay at college in four short years, Van Wilder is currently working on his seventh.  A legend on campus and popular with what seems to be everyone, Van is what every boy dreams of becoming.

Our story opens with a great site gag that makes oral sex not a crime -at least not his type.  A bare assed Van ends up on the roof of his dorm and takes it upon himself to deliver wisdom only Van Wilder can deliver to a boy ready to jump.  It is this "talk" that saves the boy's life in that a safety net has time to be set up before he jumps.

Next we are catapulted to where Van is looking to hire an assistant for the school year and after "interviewing" many possible candidates, is left with no reasonable choice.  Dwelling on this while sitting in his dorm room, we meet Taj (Kal Penn), an Indian exchange student who applies for the job.  So impressed with his devotion to women and how to get them in bed, though he has yet to do so, Taj gets the job.  You'll never hear more names and phrases used to describe this type of oral sex in your life.  Taj is a pervert for delivering oral sex to a lady and Van loves it and promises to make it a reality.

Enter college reporter Gwen Pearson (Tara Reid) who gets saddled with the job of getting a story no one has been able to get before: the story of Van Wilder.  While trying to persuade Wilder to give the goods of his life and opening his eyes to life, her own begins to change.

Change is also in store for Van as suddenly his father decides not to pay his tuition and he is forced to find "inventive" ways to stay in school, Van is forced to please a school official only to find out that the forms and agreements were available free of "charge".  This is a great comic bit!

As the story progresses, Van falls for the would be reporter and angers her current boyfriend Dick (Daniel Cosgrove) and the fun begins as revenge is at hand.

One could continue the story play by play, but so much is visual.  A boxer dog with testicles the size of weather balloons; canolis that words will never describe, but will bring you to tears; a legend in his own mind frat president about to lose his girl to Van; impressive breasts; great site gags; and even a love story.

This is not Slackers or even American Pie.  It, like National Lampoon's Animal House, stands proud and tall by comparison.  This is a modestly raunchy, woman exploiting, fun romp through one of man's wildest fantasies: to be the go to man on campus; to be wanted by every woman there; to be so damn popular that getting an education is second to getting drunk, stoned and laid.

For those that love this type of film, I'm sure you'll recognize a couple of familiar faces from the past: Booger from Revenge of the Nerds; Curtis Armstrong plays a campus cop; and Tim Matheson (Animal House's Otter) plays Van's father.

This film is likely to amuse and please teens to adults with its merging of Animal House, Ferris Bueller's Day Off and Rushmore humor, while making its own statement of what Van Wilder really is - great comedy.

Oh, and stay for the credits, the out takes are fantastic!