Up In the Air 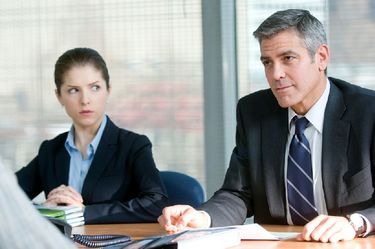 
This ebullient dramedy from Jason Reitman (Thank You For Smoking, Juno) has George Clooney in top form. As he's proved to be a successful leading man in a wide variety of pictures (after "Roseanne" and "ER" on the small-screen, even less successful ones like Out of Sight and One Fine Day, for many, especially large numbers on the distaff side, he could be the closest thing to Cary Grant these days.

Up In the Air is wry, timely, and insightful, and besides Clooney (The Fantastic Mr. Fox, The Men Who Stare at Goats) features Vera Farmiga, Anna Kendrick, and Jason Bateman.

This character-driven road-trip of sorts sharply opens with individual's responses to being professionally sacked. Clooney's urbane, slick corporate downsizer, big-time frequent-flier Ryan Bingham has some inventive tips for maneuvering through an airport.

In the plot by scribes Reitman and Shelton Turner, Bingham's unflattering, economical multi-tasking has him moonlighting with motivational meetings about simplifying in all aspects of daily life while bonding with an alluring businesswoman (a very good Farmiga of Orphan). He senses problems when his boss (a lightly hirsute Bateman of Couples Retreat) retains efficiency expert Natalie (Kendrick of Twilight: New Moon - Bella's quick-witted friend Jessica) for some necessary consolidation.

Ryan is the model for having less to be successful in his line of work, as his living quarters in Omaha indicates; it makes most upscale hotel rooms look more lived-in. He does the most to keep his life without unnecessary baggage. Up In the Air unfolds with as an often unpredictable look into those uncertain of where their lives are going and those about to realize a new direction is just the thing.

Kendrick and Farmiga are genuinely committed to their unstereotypical parts that bring out Ryan's charismatic best and vulnerability that Clooney makes all his own with a certain spry drollness. Also, Amy Morton and Melanie Lynskey (The Informant!) lend adequate support as older and younger siblings and sisters of an estranged Ryan, Kara and Julie, respectively. And, Danny McBride, J.K. Simmons, Zach Galifianakis, and Sam Elliott have lesser turns, but still catalyzing moments.

Reitman and Clooney optimize their snappy talents to flighty, bittersweet and thematic effect which upends the envious and notions of comfort. This whisking around the U.S. reaches its destination without too much sentimentality in illuminating a climate of personal and corporate change during deep economic strife.