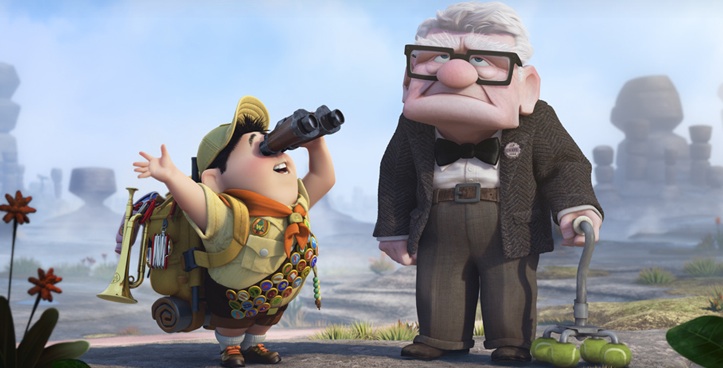 
One doesn't have to go out on a limb to say that the Pixar-produced Up is one of the best animated films or even one of the best films of the year, like last year's Wall-E.

Under Pete Docter's direction and collaboration with Bob Peterson on the script the detail to storytelling and animation has a maturity to enchant all ages, at least between those of the two main characters, 78-year-old Carl Frederickson (Ed Asner) and 8-year-old Russell (Jordan Nagal).

After personal hardship, Carl takes it upon himself to bring his up-for-demolition home aloft by way of lots and lots of helium balloons. Unbeknownst to him, there is a companion - the avid, nervy Russell (voiced by Nagai) who is up for another Wilderness Explorer badge. The trip to the Southern Hemisphere will keep them and most viewers off guard.

Docter works with his stellar animators to raise the boundaries for bright, vivid colorization and designs, from a variety of settings to the characters. It's kind of funny, yet creative how those of youth are more rounded off than their older, squared counterparts.

Asner and Nagai prove to be quite a fine pair even as their relationship is one of a rocky road. Plummer, given a boost by the animators, is more than up to the task as the astute antagonist opposite Carl and Russell who really desire to end the void in each of their lives. Some of the more lively and amusing scenes involve "talking" dogs through the prowess of the larger-than-life explorer.

Up never lets go of what Carl and Russell are going through as the lighter, action-oriented sequences are juxtaposed with ones contemplative and rather melancholic, especially an extraordinary wordless prologue of sorts featuring Carl and Ellie. If the story sort of floats away from its intrinsic wackiness, there's something winning and sometimes heartbreaking even with nary a female character as the last scene is sentimentally appropriate. The filmmakers and those like Carl and Russell have the resonance to make staying adventurous with an eye on the horizon and mindful of loved ones something illuminating, masterful, and refreshing.