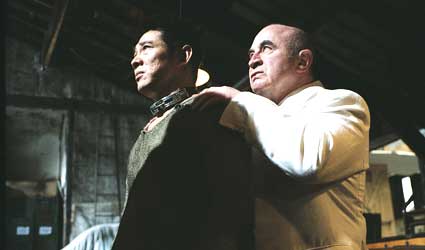 
Unleashed is a quirky action movie with European stylings that may be Jet Li's best English-language one to date.

Under the direction of France's Louis Leterrier, the writing collaboration of Mark Kamen (The Karate Kid) and Luc Besson (The Fifth Element) helps to showcase the martial-arts star's thespian side.

Originally entitled "Danny the Dog", Unleashed is more sensitive to its dramatic side than expected, though fans looking for humor and brutality won't be disappointed.

Those familiar with Witness and Besson's The Professional may find a comparable outline here though this twist on the genre doesn't really deliver on its premise.

Li is Danny, virtually an attack dog controlled by vicious London loan shark Bart (Bob Hoskins). When clients don't pay Bart, Danny is let loose like an unconscionable killer. He's been a slave since his childhood and after being struck back his docile side takes over. Li does a good job endowing the dichotomy in behavior.

The script has Danny freed from Bart's captivity. As a soft person with a fascination for pianos he is lead to a blind American piano tuner, Sam (Morgan Freeman of Million Dollar Baby). His young prodigy of a goddaughter is Victoria (Kerry Condon) who is studying at a London conservatory. Danny is embraced by Victoria and the sagely man who'll help him break out of his shell. But the devil inside the puppy exists as his old life will have a way of finding him.

There's a palpability to the struggle that Danny is enduring with compassion surrounding the turmoil and rage around him. Hoskins and Freeman offer enough nuance to their parts when it comes to greed and warmth that enhances the binary experience. And, Condon does what is necessary to help Li as her naive character with musical aspirations learns what the cold, harsh Pavlovian life is like.

Unleashed had potential in reaching its humanistic side. But, this charged live-action picture shot in a very grainy and gritty texture brings the sadistic and the jeopardized out more in viscerally-staged action scenes. Yuen Wo-Ping (The Matrix, Kung-Fu Hustle) excels again in the choreography where hand-to-hand combat unfolds at times with a startling ferocity. Li's fans may be surprised more at how well he performers as an actor in a film that is edgy on the surface, but rather sweet inside.