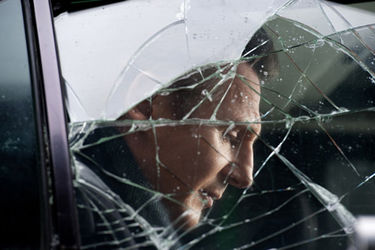 
Dr. Martin Harris (Liam Neeson) and his wife Elizabeth (January Jones) have just arrived in Berlin where the doctor is to address a biotechnology conference.

Just as they get to the hotel and she goes into to register them, Harris realizes that he has misplaced his briefcase.   So he hails the first cab and takes off after it -- without letting his wife know where he's going!

Even without seeing the trailers, you just know that something bad is going to happen, and sure enough, his cab is involved in a horrible accident.   He ends up in the hospital for a few days, suffering from amnesia.   As he tries to piece together his memory he finds that some other guy (Aidan Quinn) has taken his place, both with his wife and at the conference.

Harris has a big problem - nobody attending the conference has seen him before, his passport and identification is missing and even his wife claims that he's a stranger.   The driver of the crashed cab (Diane Kruger) is the only one willing to help him - but for a price.

Kruger is feisty and tough here, and quite believable.   Jones, on the other hand, shows hardly any emotion at all.   Neeson is good at playing someone who is thrust into difficult situations.   He's a big guy, and he'll only take just so much abuse, before he takes matters into his own hands.

There's plenty of action, a couple of good chase scenes and even though the plot is hard to swallow at times, Neeson is a lot of fun to watch.