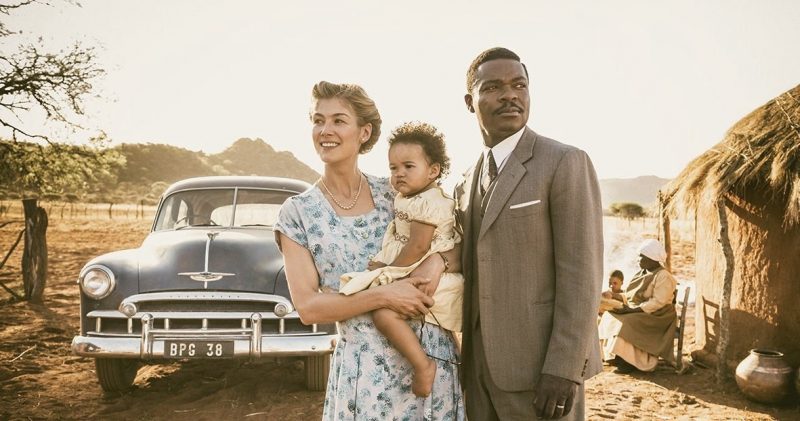 
A glossy, handsome cousin to the Jeff Nichols film Loving is the true account of interracial marriage circa 1947-48 from the maker of Belle which had a mixed-race aristocrat at its center.

So, the investment into this dynamic which fuels marriage and a child may be difficult to absorb; yet it is the precursor for the many obstacles that the vulnerable yet resilient couple must face. A pretty glamorous Pike will stir her soul into action for the beloved impassioned man whose oratory skills send the pulse of the proceedings up a bit. Ruth's bigoted father (Nicholas Lyndhurst) and Seretse's sister (Terry Pheto) voice their disapproval in different ways. Jack Davenport as Sir Alistair Canning and Tom Felton represent the austerity of colonialism at the time when apartheid was uncompromising in neighboring South Africa.

A United Kingdom captures the post-war period in lush strokes with the African heat not visibly affecting Ruth too much. Being with Khama and Williams is an experience of finding prosperity and support from adversity which Pike and especially Oyelowo locate in their performances as honor, duty and impactful affection are key to the equation.

Yet, the approach of the attentive Asante and writer Guy Hibbert (Eye In The Sky) doesn't keenly maneuver around the hackneyed and stereotypes to accentuate a genuinely moving drama which matches some of its arresting, tender sequences. Whereas Loving handled the landmark civil rights case with subtle aplomb, in this case the filmmaking doesn't necessitate a keener immediacy to the events at hand. In essence, the politics has a more interesting upper hand on the influential love story.