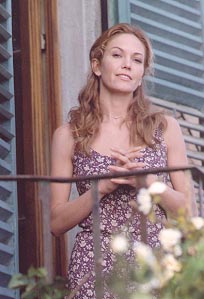 Under the Tuscan Sun

In a different time when films were generally in black and white there were scripts written around leading ladies like Betty Davis and Joan Crawford.  In Under the Tuscan Sun, director/screenwriter Audrey Wells (Guinevere) smoothly blends numerous characters into a carefully paced film which revolves around recently divorced Frances Mayes (Diane Lane).

Frances, as part of her recovery from a sudden divorce driven by her husband, is sent on a Tuscany vacation by her pregnant friend Patty (Sandra Oh).  Her mission is to forget and relax.  Half way through the trip she impulsively buys a run-down Tuscan villa named Bramasole, which means "something that yearns for the sun."

In her new life she works to restore the old home which is sold to her by an elderly women who sees a sign in pigeons that Frances should own the house.  The pace of repair on the house parallels Frances' rebuilding of her confidence, it takes time.

The passage is filled with barriers and opportunities.  She is provoked by hedonist, Katherine (Lindsay Duncan) who has a Fellini flair.  She looks like and acts like Anita Ekberg in La dolce vita. Duncan's fifty-ish character has the courage to "live spherically" and is very comfortable inviting Frances to watch her sexy young gigolo paint her portrait while she lies with very little cover.  Her role has post season awards written all over it.

Frances finds herself admired by Signor Martini (Vincent Riotta) but he is loyal and doesn't stray.  Marcello (Raoul Bova) on the other hand is as anxious as she is and their affair awakens feelings she has suppressed.  She dances on her bed celebrating and thanking the picture of the Madonna, the original Christian one.  It's at this point where Lane excels and she allows us to feel the joy that is returning.  She is a performer who can involve us with facial expression alone.  Here her face is as bright and filled with joy as it was in her first film A Little Romance (1979).

When I interviewed Lane I asked her about Frances' relation with the Madonna picture and the contrast with her admiration for the free-spirited Katherine.  She perceived Frances' attachment was with the supporting protecting mother aspect of the Madonna who comforts and approves.

Director Wells doesn't bring us down any dark roads.  In fact the script is infused with comedy that could easily be real.  Frances' initial life in a divorce hotel exposes her to a doctor and lawyer who constantly cry in the room next to her but stop and apologize when she bangs on the wall.  Her repair crew comes from Poland and the language barriers along with the limited knowledge of the crew provide more laughs as walls crumble.

Director Wells molds a delightful script which includes a romance between a young Polish worker and an Italian girl that provokes the Italian father; lady bugs that become a symbol; "George of the Jungle" speaking Italian; scorpions that are defeated; and Frances wearing a white dress for a lover while carrying a black rain coat.

However it is only when a wedding is completed, Frances walks with her arms unfolded and an old man smiles that we are satisfied that she has completed her transition.