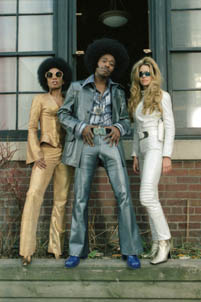 Eddie Griffin (John Q) stars as secret agent, Undercover Brother, who's recruited by an organization that is devoted to stomping out the white man's influence over black culture.

Sporting bell bottoms, a huge Afro and driving a vintage gold Cadillac convertible, he's a relic in a space age era.  Even when a female colleague refers to him as a "Soul Train reject with a Robin Hood complex," he still thinks he's very cool.

His mission is to find out why General Boutwell (Billy Dee Williams - in a humorous take-off on General Colin Powell), a highly respected black general, gives up a Presidential bid to open a fried chicken business.

Watching his announcement on T.V., the organization is aghast and convinced that a secret group called "A Mann" with its sinister Mr. Feather (Chris Kattan) as the point man, is behind the plot.  So, Griffin is sent in to infiltrate their group disguised as a meek, bespeckled office worker.

Once there, however, he falls under the spell of the shapely and beautiful "White She-Devil" (Denise Richards in her best sexy femme fatale mode).  She works her considerable charms on Undercover Brother and very soon he's talking like a white man.  He dresses in crew necks and corduroys and even, heaven forbid, acquiring a taste for sandwiches smothered in mayonnaise!

There are a lot of racial clichés on both sides.  Blacks and whites are made fun of for their style of dress, music preference and the way they talk, most of it harmless and very funny.

A sequel is already in the works for Griffin's silly spy, and I for one, will be happy to see this stuck-in-the-70's guy once again.