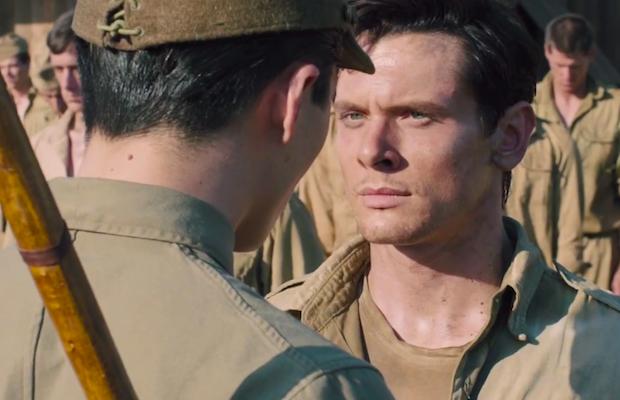 
This biopic of Louis "Louie" Zamperini (endowed with tenacious zest by Jack O'Connell) is a compassionate ode to an Olympic runner whose valor was pushed to the limit in a World War II Japanese P.O.W. camp. But, as directed by Angelina Jolie after In The Land of Blood and Honey, it should have been more of an emotional powerhouse for as long as it took to secure the rights and finally get the story up on the silver screen (it was originally in the works more than half a century ago when Tony Curtis's initiative never came to fruition). Just this past July the off-screen Louie passed away of pneumonia at 97.

Unbroken is a resonant, if superfluous triumph of the spirit old-fashioned saga that is most gripping in its early reels when Louie in 1943 is on a mission in his B-24 Fighter aircraft against the Japanese. While under enemy duress the bomber beset with mechanical woes attempts to maneuver back to its base.

From Laura Hillenbrand's lauded novel, Joel and Ethan Coen's script from an earlier draft by the talented Richard LaGravenese and William Nicholson adequately fills in the backstory of Louie (C.J. Valleroy) as a meek Italian immigrant early teen engaging in much mischief and was on the receiving end of prejudicial remarks from his peers. Older brother Peter (John D'Leo) helps him to reform from this erratic existence by getting him on a course that would be track and field. It leads to Adolf Hitler noticing the amazing, iron-disciplined Louie in the 1936 Berlin Olympics by a remarkable feet in the 5,000 meter event.

It seems like there's enough for more than one movie here as Jolie obviously augments Louie's mercurial nature once his plane plunges into the Pacific (with eight perishing) and tenuously getting by on a raft with two crew members - pilot Phil (Domhnall Gleeson) and tyro gunner Mac (Finn Wittrock). There is some camaraderie but not of the kind seen in war dramas like Fury as 'Zam' as his buddies call him listen to him talking about his mom's gnocchi.  Over a month later Mac has succumbed to the conditions and the raft is taken by the Japanese navy.

In an endurance test for Louie (and maybe for some audiences) over the next two years he faces persecution as an inmate in the aforementioned place complements of  'The Bird' (acted by Japanese pop icon Miyavi), a crazed, cruel, well-manicured officer who makes a pet out of Zam. 'The Bird' may not be as vicious as he may have been given an effete quality and mannerism that may put him in line more with Javier Bardem's baddie in the last 007 outing Skyfall.

Jolie competently, but all-too-obviously tries to convey what makes Louie's journey truly remarkable. But, as its moniker achieves some significance, the real identity behind the nightmare on many levels feels elusive and a game O'Connell isn't really to blame for not peeling back the layers of a war hero. Unbroken is a war drama that may leave many in awe and agape but really doesn't soar nearly on the level of its antecedent whose author's Seabiscuit had much more of a poignant transition to celluloid. Nonetheless, thanks to the gorgeous lensing by Roger Deakins (who gave Skyfall a stunning look) among other noteworthy craft contributions a visual finesse is hard to discount despite really not discerning how enormous wreckage was overcome by an enduring humanity.