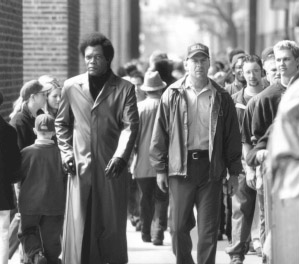 The slow pace of Unbreakable diminishes its mystic message and the relationship between David Dunn (Bruce Willis) and Elijah Prince (Samuel L. Jackson).

Each man carries an unexplained burden.  Elijah born in a department store in 1961 with broken arms and legs, appears when David is the only survivor of a train heading for Philadelphia which  crashes at 3:15 p.m. killing one hundred eighteen passengers and seven crew members - everyone but David Dunn.  Willis' Dunn carries a burden of guilt from the crash added to his alienation from his wife (Robin Wright Penn); she sleeps down stairs and he shares a room with his son, Joseph (Spencer Treat Clark).

The reunion of Willis and Jackson, both appeared in Pulp Fiction and Die Hard With A Vengeance, again produces a positive chemistry between their two very different characters.  Jackson's Elijah deals in comic book art in a small dark shop and Willis' David is a security officer on a college campus working far below his capacity, his goals having changed after a car accident which hurt his high school girl friend leaving him without physical damage.

Director M. Night Shyamalan (The Sixth Sense) uses various techniques to hint at the climax.  Just before the train speeds to a crash we see a conversation between David and a young woman from the separation between the two seats in front of them, framing each character as they speak with the sides of the passenger chairs.  Shyamalan constantly views the characters from reflected images in glass, and allows us see David from the top of a closet and Elijah from the bottom of his foot.  All in a dark ink like world.

We learn that Elijah has broken 54 bones and, from old newspapers, that David has given up certain success without knowing why.

As time moves on Elijah's padded dashboard gives further testimony to his frail low bone density disease and David begins to see beatings and killings on a raining night as he walks with his police poncho and hood.

In the finale the tedious pace is explained and we see a son, confused about his father, calculate enough to understand him while we learn about heroes of the artificial kind.