The Two Faces of January 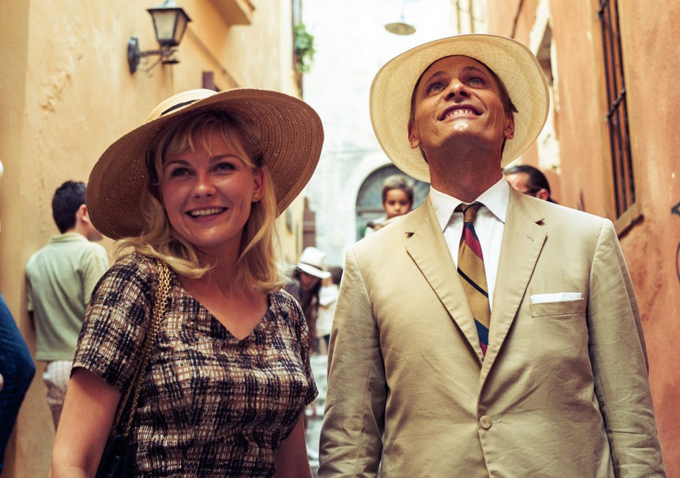 
An old-fashioned noir-like thriller set in 1962 works romance, revenge, and mythology (from its title) with prickly precision and measured ambiguity. That it comes from a potent Patricia Highsmith (The Talented Mr. Ripley) 1964 novel may come to no surprise for those drawn into its cleverly staged tremulous traps although maybe smudged by its compromises.

Hossein Amini's beautifully shot and delicately taut debut of a psychological thriller The Two Faces of January features Viggo Mortensen (A Dangerous Method) and Kirsten Dunst (Melancholia) with Oscar Isaac (very good in The Coen Bros. Inside Llewyn Davis). The aforementioned classy-looking Big Apple married couple play financial consultant Chester and Colette MacFarland on vacation in Athens (before Rome and Venice) as the Parthenon is prominent early on under a striking luminous setting.

There they meet a charismatic expatriate and multi-lingual American tour guide Rydal (Oscar Isaac of Inside Llewyn Davis) who is making waves with a young, well-off tourist (Daisy Bevan) and capturing Colette's attention. An uninvited private investigator (David Warshofsky of Now You See Me and Captain Phillips) puts the very nattily dressed Chester (the ladies will like his 'wrinkle-free' linen suits) under strain because of business done with a client, as well as newsprints and passports.

When a homicide occurs in their five-star hotel, a reliable, if disingenuous Rydal is on the spot to get them to Crete as an alluring triangle is in place with relationships morphing in a way that has a simmering mood, augmented by the likes of innuendo and current iniquities felt by the writing of Amini (The Wings of the Dove, Drive, and Jude). It alternates from more solemn interludes to explosive ones to let the interplay to make the personal foibles and indiscretions embroil the Closer, insinuating calculating ways they deal with each other in smaller and larger ways.

The ethical eeriness attaches itself to character assignations whether rage or jealousy, as Dunst, like the brightly assured filmmaking itself, is efficient in the accompaniment in realizing what is meted out as Colette probably understands there will be change upon a return from sunny southern Europe. Isaac and a wrinkled-faced Mortensen really expose the edgier, more intricate ways through the tension supported by Alberto Iglesias' moody score in the mixed, conflicted emotions of flawed, ruing and desperate men clandestinely adept to financial gain. But, whose perils and sense of distrust have a cinematic convocation that doesn't really betray the unsettling ways they intertwine providing an odd dynamism to "The Two Faces of January" while basking in the gorgeous cinematography by Marcel Zyskind.