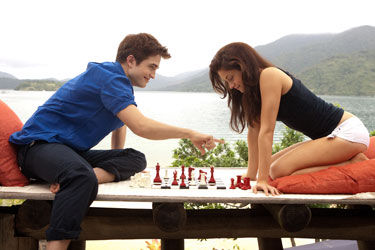 
The high expectations for the final segment of the twilight saga are dashed by poor direction and the stretching of the final book into two parts without sufficient material for more than one film.

Director Bill Condon (Dreamgirls, Kinsey) can't be blamed for the stretching of limited material but his lethargic direction is filled with images and little or no substance, power or emotion.

The main theme here is the marriage and conception of a spawn conceived on the wedding night which should have been sensual and exciting but falls to soft images and feathers falling around the bed the next morning. The dark birth at the end of the film is made up of the most dramatic and bloody scenes (that's I guess to show blood for the vampire theme), it is dark and quite violent and leaves us with a cliffhanger at the end of the film.

Ashley Greene who plays Alice Cullen appears to be the wedding planner and we see different images of what the wedding might be before it actually occurs. Should it be a white wedding with black clergy with a little of blood, at one point we are led to believe that is happening. When Jacob (Taylor Lautner) learns of the wedding he predicts she will die, and he must make a decision to protect her or join his wolf pack and destroy her.

The best images in the film come on an island off the coast of Rio where only one house stands and the young couple spends their honeymoon the placid water and safe island in contrast to the danger they are expected to face.

At one point in the film one character says "I don't see the point," that is the emotion we feel at the end of part 1, it's just not enough and what is there is minimal. Granted the wolfs get called in and there is discussion of breaking the treaty and we watch as Bella (Stewart) debate the drinking a true Bloody Mary and we wonder if her baby will be another Rosemary's Baby, as we mildly look forward to the second part of the end.