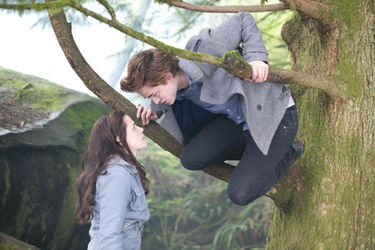 
Stephenie Meyer's 2005 first novel of a vampire and the teen who loves her is given the big screen treatment by Catherine Hardwicke (The Nativity Story).

Unfortunately, the many devotees of the best-seller may admit that this is hardly a bloody good romantic tale for the tween to college age adolescent.

Think of the small-screen "Charmed" crossed with a little Anne Rice and one might get the picture here.

The mood for the lead character Isabella "Bella" Swan as provided with awkward charm by Kristen Stewart (much better in the soul-searching Into the Wild) is set for a supernatural relationship. With her mother relocating to sunny Jacksonville from Phoenix, Bella opts to be with police chief father (Billy Burke) in the more overcast Pacific Northwest town of Forks, Washington.

At her new high school where she is looked upon as an outsider, though reluctantly finding herself in a nerdy clique, she becomes enamored with heartthrob-looking Edward Cullen (Robert Pattinson as the unlucky Cedric in Harry Potter and the Goblet of Fire). It turns out in Melissa Rosenberg's screenplay with some narration by a transfixed Bella that what should be a bit enthralling on the supernatural and romantic side comes off as too anemic.

There is hostility, rescue, and resent around the relationship of Bella and the deadly, conflicted Edward as she gradually finds her way into his clan (there is a little baseball and an Italian-styled supper). The yearning of the prose sometimes translates to the screen with affecting aura, especially like "Phantom of the Opera". Yet, there really isn't much shape to the relationship and the main conflict is often diffused in spite of the unique qualities of Edward as a "vegetarian" of his kind. It leaves Stewart especially and the onlooker a bit befuddled for Bella's real attraction for someone who would save her from another venomous vampiric clan as well as being her true love.

Twilight finds some humor from its high-school setting like other similarly themed films like The Craft and Burke is a source of comic relief with his mention of pepper spray. Nikki Reed and Peter Facinelli are recognizable faces as Edward's sister and "doctor" father, but don't make much of an impression like Native American Jacob (Taylor Lautner) a potential suitor for Bella and garrulous Anna Kendrick as the quick-witted Jessica. One wishes there was more on-screen spark for Stewart and Pattison, but it may have to wait for the next installment if the fan-base has anything to say about it.